The other side of contemporary history. The Kunsthalle Zurich invited Dominique Gonzalez-Foerster to create an area for lingering on the ground floor of the Museum. Working in cooperation with Tristan Bera, they created a hybrid space containing books, films and display cases which are continually open to new uses and the contents of which change according to the different projects being, herald a fictitious and real programme. The project starts with 'Balzac Nouvelle Vague'. 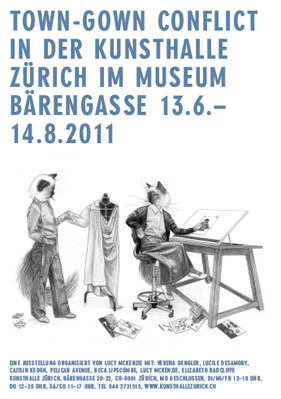 The French artist Dominique Gonzalez-Foerster (born in 1965, lives and works in Paris) is known for her film projects, photographs, room installations, collaborations with other artists, scenographies and display situations. Her room installations describe particular moments, evoke atmospheres through memories and projections and enable the emergence of transitory locations. The relationship of the individual to his or her “environment” – between the physical and spiritual “interior” and the “exterior” – is the focus of attention here.

The Kunsthalle Zürich invited Dominique Gonzalez-Foerster to create an area for lingering on the ground floor of the Museum Bärengasse. Working in cooperation with Tristan Bera (born in 1984, lives and works in Paris), they created a hybrid space containing books, films and display cases which are continually open to new uses and the contents of which change according to the different projects being, herald a fictitious and real programme.

Reminiscent the entrance of a small cine-club but also a Godard domestic scenotope (Une femme mariée, 1964) and including a projection room for oblique documents, HUMAN VALLEY is a oneyear display for hybrid presentations of borderline topics. It is also a collective and organic process, open to new encounters along the way...

The project starts with «Balzac Nouvelle Vague» or the question how the French Nouvelle Vague has been shaped by the Balzacian ambition of fiction as big as life – like Eric Rohmer who structured all his cycles in relation to la Comédie humaine, Jacques Demy’s recurring characters coming back from film to film, which is a Balzacian literary finding, or like François Truffaut whose main characters are obsessed with Balzac from Antoine Doinel in Les 400 coups (1959) to Pierre Lachenay in La peau douce (1964), including Jean-Paul Belmondo reading La Peau de chagrin (1831) in La sirène du Mississippi (1969) or Delphine Seyrig quoting Madame de Mortsauf from Le Lys dans la vallée (1835), which Godard also wanted to shoot in 1966, but also like Jacques Rivette who adapted four novels of Balzac.

Often seen as a classical dry author with endless boring descriptions, Honoré de Balzac is the inventor of an incredible optical system that operates with an endless number of characters, and stages them on the front page or the background of a panoramic series of novels. He also invented the notions of prequel, sequel and spin-off among other exciting literary findings. Some of his characters, La femme de trente ans, La Torpille, Eugène de Rastignac, have become archetypes for social studies and in Brazil a forty-year-old woman is now known as a balzaquiana. His less famous, dark and fantastic oeuvre had a large influence, first on the decadent novels and then on the noir modern literature. And as Godard says: “We always talk about an old movie but never about an old Balzac novel...”

In the Bärengasse frame of HUMAN VALLEY – like savage detectives or a combo of passionate readers and movie-goers – Dominique Gonzalez-Foerster and Tristan Bera present their sentimental research on stimulating links between Balzac and the Nouvelle Vague. In relation to this presentation of the first chapter of HUMAN VALLEY there will also be a reading by Catherine Millet (fall 2011) and film screenings – see list on www.humanvalley.ch

After «Balzac Nouvelle Vague» HUMAN VALLEY will invite guests to present their own borderline research – check dates on www.humanvalley.ch

Tristan Bera (born 1984, lives in Paris). Fond of Decadent aesthetics and cross-over exhibitions, he worked on mainstream shows like Dada (2005/2006) at the Centre Pompidou, Richard Wagner, visions d’artistes (2005) and Gainsbourg 2008 at Cité de la Musique in Paris, and worked at Studio Frédéric Sanchez (2008). He received a MA in philosophy and a BA in art history in 2009. He is currently working at Le Pavillon/Palais de Tokyo’s creative lab. Now preparing the shooting of a short film together with Dominique Gonzalez-Foerster and working on a book about J.K. Huysmans.

Events:
Please consult the latest information on our website www.kunsthallezurich.ch and www.humanvalley.ch