(re)Collection and It's Different

An exhibition that explores the role of institutional art collections in the 21st century. It features approximately 40 works from The New School's collection, including pieces by Larry Bell, Clegg and Guttman, Camilo Egas, Shirin Neshat, Roxy Paine, Peter Saul, Richard Tuttle, and Carrie Mae Weems. The exhibit showcases newly acquired work and historic commitment as a vehicle for sociopolitical change. Contemporary is on view the 30th Annual Architectural League Prize for Young Architects and Designers. 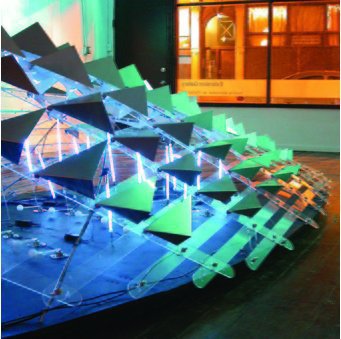 The Sheila C. Johnson Design Center at Parsons The New School for Design presents (re) collection, an exhibition that explores the daily lives of art objects and the role of institutional art collections in the 21st century.

(re) collection features approximately 40 works from The New School's art collection, including pieces by Larry Bell, Clegg and Guttman, Camilo Egas, Shirin Neshat, Roxy Paine, Peter Saul, Richard Tuttle, and Carrie Mae Weems. The collection reflects The New School's historic commitment to art as a vehicle for sociopolitical change, while new acquisitions support the vision of the university as an environment for innovative thinking and artistic experimentation. The exhibit will showcase newly acquired work, such as Trevor Paglen's The Fence (Kickapoo, Texas), 2010, which visually captures the electromagnetic border that surrounds the United States; brings to light works rarely seen due to fragility, scale or subject matter, such as Roxy Paine's 1995 conceptual work Plug-in Painting; and debuts a newly restored Camilo Egas mural, Harvest Festival, Ecuador, 1932, commissioned for the entrance to The New School's Martha Graham Studio located within its historic West 12th Street building designed by Joseph Urban.

"At the most pragmatic level, the exhibition looks at what we have defined as the collection cycle, the nuts and bolts of collections management," said Silvia Rocciolo and Eric Stark, curators of the collection, who organized the exhibition in collaboration with John Wanzel, a recent MFA Fine Arts graduate of Parsons. "At a deeper level, the exhibition addresses institutional memory. It is an examination of the shifting intellectual and creative landscape within the university and its relationship to a dynamic global environment. Implicit in the collection is a tension, between the need to conserve history and perpetuate a legacy, and the need to sustain a relevant dialogue with the present."

The collection was established in 1960 with a grant from the Albert A. List Foundation, whose founders Albert and Vera List were dedicated patrons of the arts and of The New School. Now grown to approximately 1,800 postwar and contemporary works of art, the collection encompasses nearly all media and works by some of the most innovative and creative artists of our time. Installed throughout the university campus, the collection offers students and faculty a rare opportunity to engage with art on a daily basis, making it a distinctive component of their educational experience.

"Ultimately, (re) collection refers to the question of meaning," said Wanzel. "What does it mean to be an institutional art collection at the beginning of the twenty-first century?"

Said Radhika Subramaniam, Director and Chief Curator of the SJDC: "The daily life of the New School art collection is actually amid university life, in our hallways, offices and conference rooms. Bringing the collection into the gallery offers us an rare opportunity to pause, not only to reflect on the role of these works within this institution, but also on our relationship to them as artists, designers and critics."

Participants in the program are chosen through a portfolio competition juried by distinguished architects, artists, critics, and the Young Architects and Designers Committee.The committee, a group selected each year from past winners of the Architectural League Prize, is responsible for developing the program's theme and selecting competition jurors. Open to designers ten years or less out of school, the competition draws entrants from throughout North America. The lecture series and exhibition by winners of the competition provides a lively public forum for a discussion of their work and ideas. Winners’ designs will also be illustrated in a catalogue to be published by Princeton Architectural Press.

The Architectural League Prize is made possible, in part, by public funds from the New York City Department of Cultural Affairs, in partnership with the City Council. The program is also supported by the LEF Foundation and by Dornbracht, Ibex Construction, Susan Grant Lewin Associates, and Tischler und Sohn.