Project 35 is an evolving exhibition of video works selected by 35 international curators and designed in a flexible presentation format, reflecting the diversity and unique nature of the many national and international art spaces ICI partners with. For Project 35, each curator has been invited to select one artist's video that they think vital for contemporary art audiences across the globe. 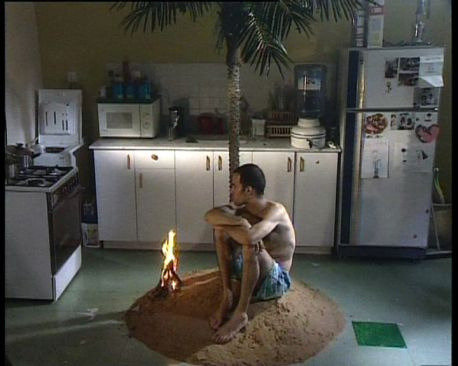 Project 35 is an evolving exhibition of video works selected by 35 international curators and designed in a flexible presentation format, reflecting the diversity and unique nature of the many national and international art spaces ICI partners with. For Project 35, each curator has been invited to select one artist’s video that they think vital for contemporary art audiences across the globe. The result heralds the new decade, and showcases a new exhibition concept for ICI, with an eclectic compilation of works that reveal the global reach that video has achieved as a contemporary art medium today. It is most fitting that this project begins with Guy Ben-Ner’s Berkeley’s Island (1999), which refers to George Berkeley’s famous dictum “to be is to be perceived”. It is the curators’ and ICI’s hope that these videos are “perceived” by diverse communities within the exhibitions spaces that Project 35 will travel to, inspiring debate and functioning as an international catalyst for dialogue and exchange.

The works are presented in 4 chapters, each containing 8 to 9 videos, and the exhibition unfolds simultaneously in multiple spaces, chapter-by-chapter, over the period of a year. Project 35 will show a diversity of approaches to making video, as well as the interests artists are addressing in their practice. Taking advantage of the medium's versatility, Project 35 can be viewed in an auditorium, foyer, or in a gallery space. The DVDs can be projected or viewed on a monitor, depending on host venue needs and interests. It may be a key program component in a project space for a year; presented in weekly, monthly or quarterly screenings; or running in the cafe or education room every afternoon.

Project 35 recalls the founding initiatives of ICI. It was 35 years ago that ICI organized its very first exhibition, a seminal survey of video art titled Video Art USA for the São Paulo Biennial. It presented works by artists that included Vito Acconci, Bruce Nauman, Nam June Paik, Keith Sonnier, Steina Vasulka, and Bill Viola among others. These artists were pioneers working in a medium that was just beginning to gain traction in the field of contemporary art, and ICI proved to be an early and committed proponent of it. The international scope of ICI was clearly indicated in this first exhibition, which went on touring 4 more countries across Latin America. With Project 35, ICI further draws from its extensive international network of curators formed over the past 35 years to organize a new exhibition of international video art, and support new collaborations between curators, artists and exhibitions spaces on national and international platforms.

Project 35: Interview Series
This online series was developed by five M.A. candidates studying within various visual arts fields at NYU during ICI’s Spring 2011 Curatorial Practice course. The series provides increased engagement with the art and ideas behind Project 35 through interviews with the artists involved in the project and the curators who selected their work.