Jerome Meynen, Antoine Detaille, and Francois Dieltens are the three members of the group. They draw on paper as well as on walls, mixing their unhinged imaginary worlds over the past decade in order to create a very graphic universe, populated by strange characters. The 'Might Fall' exhibition shows previously unseen pieces, large works on paper and installations combining drawing and wood. 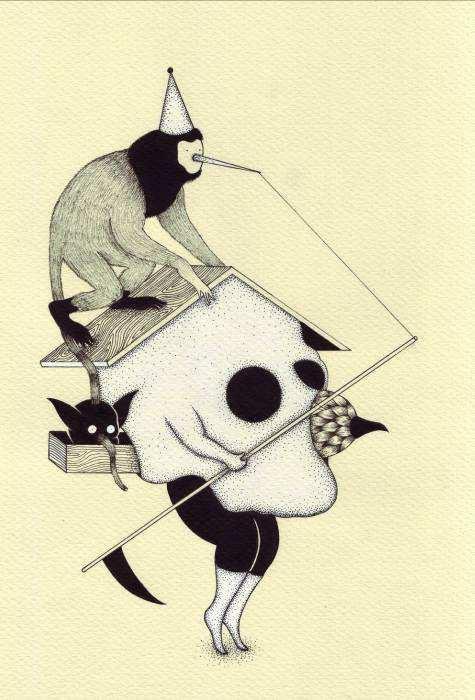 With the mission of offering a French showcase for artists already known abroad, the JAS Gallery, a small newcomer to the Paris Left Bank, will present the Belgian group Hell’O Monsters, with the exhibition "Might Fall", to be discovered from 17 June to 1 August 2011.

Born in the early 1980s, Jérôme Meynen, Antoine Detaille, and François Dieltens are the three members of the group. Using all six hands, they draw on paper as well as on walls, mixing their unhinged imaginary worlds over the past decade in order to create a very graphic universe, populated by strange characters whose silhouettes draw us into a world of questioning filled with allegories about the various facets of human nature. Often in black and white, the falsely naive characters turn out in reality to be individuals who, beneath their hoods, engage in dangerous games in the company of hairy monsters, Cyclopses, mutant animals, skeletons, eviscerated and hung beings, and other candidates for suicide. The architecture, when it takes part, bewilders us in a tangle of staircases reminiscent of M.C. Escher's impossible constructions, and becomes the theatre for a genuine danse macabre where humour flirts with death, with scenes that can border on the obscene.

Through the workings of these bizarre India ink characters, Hell’O Monsters provides a mocking look tinged with affection for the caricature of human nature caught in the midst of its contradictions. These "monsters" ultimately reflect back on ourselves, on what is most trivial in us... which brings them all the closer and ultimately makes them dearer to us, like Tim Burton's monsters.

Might Fall
The "Might Fall" exhibition will show previously unseen pieces, large works on half-tone paper and installations combining drawing and wood. In this series, the Hell’O Monsters group questions the notion of equilibrium through characters on a tightrope denoting the tension between opposites: serious and ridiculous, play and danger, life and death, humanity and inhumanity...