George Condo a collection of etchings reveal an intimate - and for many - a surprising aspect of Condo's work, display a more distilled aesthetic, rooted through great draftsmanship and line. The show is complemented by an accompanying large group exhibition of modern and contemporary paintings, drawings, prints and sculpture, featuring works by a number of the gallery's roster. 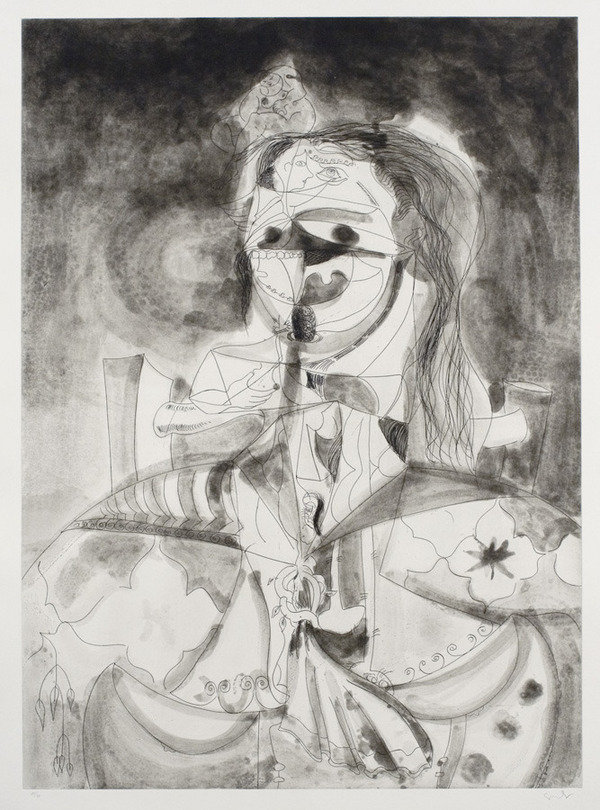 Works by the influential and provocative contemporary American artist George Condo are the highlight of Jack Rutberg Fine Arts' summer exhibition, with an opening reception Saturday, June 18, 5:00-8:00 p.m., and continuing through September 3, 2011.

Works in the Ruberg Gallery exhibition reveal an intimate - and for many - a surprising aspect of Condo's work, display a more distilled aesthetic, rooted through great draftsmanship and line. Condo is typically known for bold paintings so brash as to be referred to as gonzo artificial realism. "Artificial Realism" is the term the artist uses to describe his works, which by turns are meditative, wry, irreverent and fantastical, reflecting Condo's now-iconic surrealistic mash-up of Old and Modern Masters.

In the Jack Rutberg Fine Arts exhibition, Condo merges, through a series of works entitled "More Sketches of Spain - for Miles Davis," his admiration of Spanish masters along with his profound admiration for the music of Miles Davis, whose own jazz masterpiece album recording was entitled "Sketches of Spain." In these works from 1991, large-scale sheets and smaller works on paper executed in etching and aquatint, Condo employs an eloquent Picasso-like line with masterful draftsmanship and bravura, giving sly reference to Picasso, Dali, Velazquez, etc.

In Condo's paintings, references to Miles Davis have been a long source of inspiration. One such example is Condo's major painting in the Eli Broad collection entitled "Dancing to Miles" exhibited at the 1987 Whitney Biennial.

Born in 1957, George Condo had early associations with other avant-garde artists of the eighties, such as Andy Warhol, Keith Haring and Jean-Michel Basquiat, as well as many of the avant-garde artists in Europe. His engagement with literary figures such as Allen Ginsberg are notable, as well as a collaboration with writer William Burroughs. Condo's continued interest in music is underscored in varied ways, and took a provocative turn when he collaborated with rap star Kanye West, who commissioned Condo to create his "banned" cover for the recent chart-topping album "My Beautiful Dark Twisted Fantasy". Condo's impact upon artists of the last decade is particularly profound, as evidenced by his being the major impact of such significant contemporary painters as John Currin, Cecily Brown, Lisa Yuskavage, etc.

The Jack Rutberg Fine Arts exhibition of Condo's works - entitled "George Condo: a collection of etchings" - is complemented by an accompanying large group exhibition of modern and contemporary paintings, drawings, prints and sculpture, featuring works by a number of the gallery's roster; among them the contemporary artists Jordi Alcaraz, Ruth Weisberg, Jerome Witkin, and Patrick Graham, and the estates of Francisco Zuniga, Reuben Nakian, and Hans Burkhardt. A number of new acquisitions include works by Ben Shahn, Pablo Picasso, Mark Tobey, George Nama, Claire Falkenstein, Karel Appel and others.