For the first in a series of exhibitions on the art scene in major peripheral cities, la maison rouge trains the spotlight on Winnipeg (Manitoba, Canada). This series will not show works purely in relation to their geographical environment: its purpose in setting them in their context is help the observer understand what triggered their creation. Painting, video, installation, photography, performance art, film and music by Marcel Dzama and the Royal Art Lodge, Kent Monkman, filmmaker Guy Maddin, and many more. 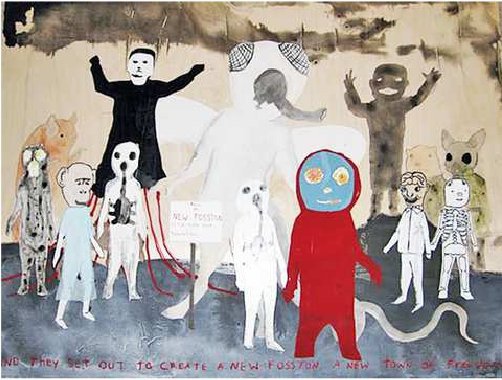 This summer 2011, la maison rouge is launching a new series of exhibitions focusing on the arts scene in major provincial cities. The first of these cities will be Winnipeg, the capital of Manitoba in Canada.
At a time when the art world is said to be heading for globalization, la maison rouge is taking a closer look at centers of creativity with a little-known yet thriving arts scene, whose artists’ work is infused with the city and its territory, history and myths.
Winnipeg is a prime example of how geographical location can shape artistic production. Long, harsh winters prompt artists to get together in their studios to work; the Winnipeg property market is more open than in Toronto or Montreal, giving artists access to spacious studios at reasonable rents.
Public and private bodies such as the Manitoba Museum, the Plug-In, a university arts center (Gallery One One One) and a quality international art magazine (Border Crossings) show art at local level, and promote and develop contemporary art and culture in the city.
Although the international art world is still unfamiliar with some of Winnipeg’s artists, others have caught the eye of critics and curators while continuing to make a rich contribution to the local scene.
Artists, their work and their cities form a close-knit and interactive network. Artists are inspired by the cities in which they live and, in return, the work they produce helps define the region’s identity. This identity is then carried in films, music, literature, performance art and exhibitions, conveying these artists’ vision around the globe.
The works shown at la maison rouge are nonetheless works in their own right. This series of exhibitions will not show works purely in relation to their geographical environment: its purpose in setting them in their context is help the observer understand what triggered their creation.

Visitors discover a fertile and creative artistic community, steeped in history and legend—the vast prairies of northern Canada, the Cree and Métis Indians, the world's coldest city, plagued by floods and, in summer, by mosquitos—but also a certain sense of despair tinged with humor, inherited from the immigrants who settled in the province during the 19th and 20th centuries.

From filmmaker Guy Maddin to artist Marcel Dzama, from The Royal Art Lodge collective to painter and video artist Kent Monkman, from photographers William Eakin and Diana Thorneycroft to artist Sarah Anne Johnson, together with Paul Butler's collages, Jon Pylypchuk's dolls and Shary Boyle's sculptures: various generations of talented artists to be discovered by the public.

Painting, video, installation, photography, performance art, film and music: all media are included so as to propose the most apposite representation of the city.

Exhibition catalogue
A catalogue in French and English in the form of a travel guide will be published by Editions Fage. It will be the first in a series of "guides" which la maison rouge will produce for each of these "travels" to distant art scenes. Produced with important members of the Winnipeg art scene - Anthony Kiendl, Noam Gonick, Cathy Mattes and Sigrid Dahle - and with Meeka Walsh and Robert Enright who are the editors of the Canadian art magazine Border Crossings, the catalogue will present the exhibited artists and the city's art scene in general.

A traveling exhibition and co-produced with:
Plug In ICA (Winnipeg) and the Musée International des Arts Modestes (Sète).

From June 23 to June 26: Festif Winnipeg