In the labyrinth. 1969-84. The exhibition by Ribe' covers a period of her production from the late 1960s to the mid-eighties. This project is part of a line of work at MACBA that wants to recuperate aspects of the artistic trajectory of some of our most relevant artists. It is centred on relatively unknown works that are nevertheless significant for the artist's body of work as a whole and for the development of contemporary art in our country. 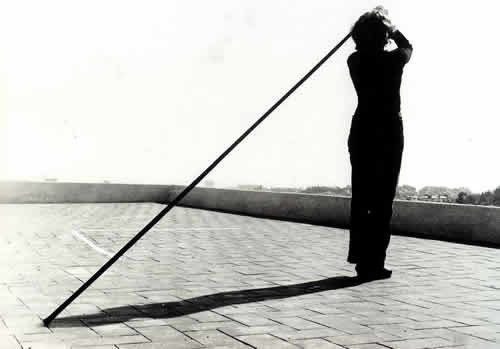 The exhibition by Àngels Ribé covers a period of her production from the late 1960s to the mid-eighties. This project is part of a line of work at MACBA that wants to recuperate aspects of the artistic trajectory of some of our most relevant artists. It is centred on relatively unknown works that are nevertheless significant for the artist's body of work as a whole and for the development of contemporary art in our country. At the end of the sixties, a new aesthetic model appeared that had a fundamental influence on the creation of new ways of conceiving the artistic practice. The associative and symbolic functions of art are renegotiated: the artwork ceases to be an autonomous entity, as was the norm in the modernist tradition, and its meaning becomes dependent on an interchange with the spectator. In this way, the ambiguity and the multiplicity of references and readings that are an intrinsic part of the work of art are revealed. In Àngels Ribé's case the chosen period is particularly significant, since it marks the beginnings of her artistic career and the consolidation of a language that has continued until today through various supports and media.

In 1969 Ribé moved to Paris, where she began to develop her interest in art around the notions of form, volume and intervention in the public space. Laberint, a transparent yellow plastic work, is a participative sculpture that explores the relationship between object, body and environment. Originally presented in the context of an event at the château de Verderonne, the work is essentially an interactive and collective piece offering a sensorial itinerary that subverts the usual opacity of the labyrinth. That same year, Ribé presented Acció al parc, where she placed a sculpture made up of a fragment of an aeroplane air conduction tube in the park. On the one hand, the work is open to participation and manipulation, especially by children who can use it playfully; on the other, it ceases to be a mere object as it is transformed with use.

Soon after Ribé was to focus her interest on de-emphasising the object in actions where the inclusion of elements and materials in nature, the work on the space, the presence of the artist's or the spectator's body as narrative elements, and the integration of geometrical forms became a fundamental part of her discourse. During the seventies, the artist moved to the United States, first to Chicago and a few months later to New York, where she would settle until 1980. In both those cities, she established contacts with the new galleries and exhibition spaces that were then emerging as an alternative to the anachronistic institutional politics and as promoters of an emergent artistic scene. Following on her earlier works made in Paris, Ribé's work at that time is characterised by her investigation of space as an environment, a trajectory or a medium. In Two Main Subjective Points on an Objective Trajectory, 1975, a series of photographs shows her daily return journey to New York over the Williamsburg Bridge, from two subjective points on an objective trajectory established by the artist.

Questions of space are closely related to the incorporation of geometry in much of Ribé's work. Whether in photography, installation, film or performance, the relation with space is essentially established through the artist's own body. In the various works entitled 3 punts, 1970–73, or in the film Triangle, 1978, the geometrical forms are created by the body in movement, in the same way as the body was able to carry light in the action Transport d'un raig de llum, 1972. In Invisible Geometry 3, 1973, the symmetry results from the displacement of the eyes from left to right, and it is this movement that creates a sort of geometrical sculpture.

Some of Ribé's works are characterised by the use of unconventional materials such as foam, water, light and shadows. In the pieces entitled Escuma, 1969, the artist plays with decontextualisation by placing accumulations of foam on a wall or in the open sea. She also plays at making the ephemeral durable through the photographic image. The three photographs Intersecció de llum, Intersecció de pluja and Intersecció d'onada, 1969, show how these elements intersect in a natural environment, and their dependence on random factors to make the interactions visible or invisible. In Light Interaction and Wind Interaction, 1973, we see the interference of two decontextualised sources of energy: the light from a bulb and the air from a fan in a park.

Also important is the artist's interest in things found by chance and in the ephemeral, and in potentiating the narrative possibilities of the environment. In her production we often find references to elements of a symbolic nature, whether corporal or immaterial. In 1979 Ribé produced Ornamentació, a series of colour slides made in Barcelona on the ornamental forms that configure the imaginary of our urban environment. In these images, the casual find is combined with a repertory of forms that configure a sculptural reflection. Soon after, she repeated the process in New York, this time with black-and-white photographs.

During those years, Ribé also became interested in performance and installation. In her performances, she no longer seeks to invest the object with an artistic entity; it is the presence of the artist and the spectator that brings a subjective factor to the development of an action in a particular time and space. The aim here is to shift the production of the meaning of the artistic object towards experience, in a process of deobjectualisation of art. It is an attempt to understand the work as something not necessarily durable, to transfer the quality of the artistic object to something immaterial and to negate its objectuality. Ribé's performances are characterised by contingency, by the possibility of one thing becoming another, by the ephemeral. Most important are the performances presented at the N.A.M.E. Gallery of Chicago and at the Vehicule Galerie of Montreal in 1974.

These works allow Ribé to enrich her vocabulary and to deal with the intervention of the unconscious and subjectivity in perception, to incorporate conjunctional aspects and the analysis of contradictory information, as well as aspects of her condition as a woman and her personal baggage. Can't Go Home, 1977, is an installation that reflects on duality, on the possibility of doing or not doing something. It contrasts past and future, reality and the dream world, memory and desire. Also in 1977, Ribé made another installation, Amagueu les nines que passen els lladres, which was presented at Galeria G, Barcelona. Here she dealt once again with the need for breaking away and opening up to other realities, with hope, by contrasting it with what can't and shouldn't be done. The dual situation that Ribé proposes in these works reveals a personal, feminine, fragmented and stigmatised imaginary, but also a parallelism with the political situation of the country, at a time when it was undergoing a process of construction of the State, precariously articulated between the burden of the recent past and the possibility of a different political imaginary.

At the beginning of the eighties, Ribé started working with a symbiosis of media: sculpture as a support for painting, as in Paisatge, 1983; or the sculptural painting of wire mesh, where painting goes beyond the support and covers the wall directly. The exhibition also presents a selection of drawings from 1984, shown here for the first time, where the wearing out of paint through the repetition of strokes accentuates the feeling of loss and fragility, so frequent in Ribe's work, in marked contrast with some of the paradigms of modernity that favour the durability and monumentality of the artwork.