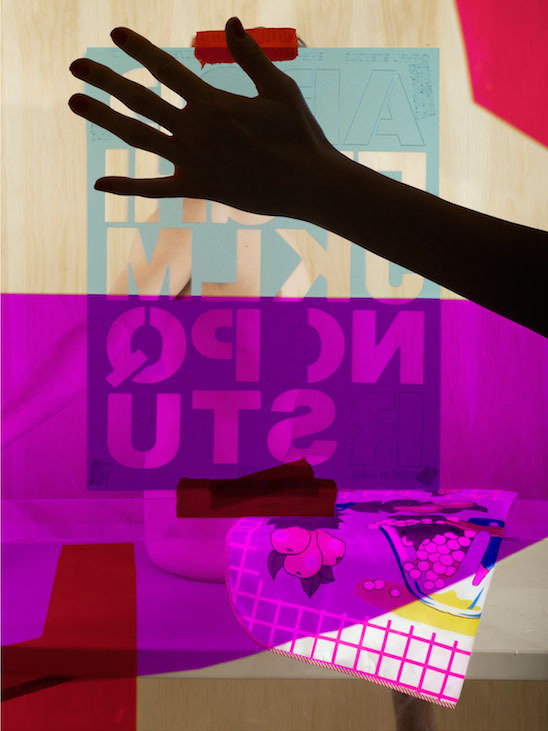 Swiss-born artists Tobias Madison and Kaspar Müller collaborate in the creation of ephemeral works suspended from the gallery ceiling. Bamboo poles and climbing ropes are combined to craft precarious sculptures that are part magic fetishes and part exotic bric-a-brac.

The photographs by New York-based artist Michele Abeles are artificial microcosms in which fragments of naked bodies are juxtaposed with synthetic props such as lycra fabrics, fluorescent gels and plastic potatoes. Playing with the motif of the still life, Abeles questions the genres of photography through unexpected combinations of low-fi special effects.

Virginia Overton's sculptures seem to evoke a sense of fragile grandiosity. Made by appropriating found objects and construction materials, they defy gravity while threatening to collapse, turning sculpture into a combination of failure and despair.

In a similar vein, Polish artist Jakub Julian Ziolkowski gives form to visionary canvases rooted in a Bosch-like universe where bodies are dismembered, strange creatures arise from the ground and colorful beings seem to swallow the paintings.

Other works are tinted by darker nuances. With her abrasive typography, Shannon Ebner's GL*R/A composes a fragmented visual poem that, according to the artist, is to be read as a hymn to great women.

In Symbionese Liberation Army (SLA) Screeds #13, 16, 20 & 29, 2003, New York-based artist Sharon Hayes bridges the gap between history and the present, between written and spoken words. Her video shows a close-up of the artist's face as she declaims the transcripts of the audiotapes Patty Hearst sent to her parents during her kidnapping. Reciting by memory, Hayes performed the script in front of an audience who helped her recall each line, suggesting that trauma lays hidden into language.

Disarmingly gloomy in their somber colors and repetitive forms, the drawings by Romanian artist Andra Ursuta seem to be trapped in a loop, portraying the same scene over and over again. Upon closer inspection, the image of a corpse surfaces among the vegetation, composing a contemporary memento that seals the exhibition with yet another ecstatic image.

Cecilia Alemani is an independent curator and writer based in New York and Milan. From 2009 to 2010, she directed X Initiative, a year-long experimental non-profit space in New York, where she curated numerous exhibitions including solo shows by Keren Cytter, Luke Fowler, Hans Haacke, Christian Holstad, Derek Jarman, Mika Takima, Tris Vonna-Michell and Artur Zmijewski. She is the co-founder of No Soul For Sale, a festival of independent spaces, non-profit organizations and artists' collectives held at X Initiative in New York and at Tate Modern in London in 2010. An advisor to Frame, the emerging art section of the Frieze Art Fair, Alemani has organized numerous exhibitions in museums, non-profits spaces and galleries, including The Comfort of Strangers (MoMA/PS1, New York, 2010), Solaris (Gió Marconi Gallery, Milan, 2009), boundLES (several venues in the Lower East Side, New York), ONLY CONNECT (with Art in General at Bloomberg Headquarters, New York, 2008, and Things Fall Apart All Over Again (Artists Space, New York, May 2005). She is the New York correspondent for Mousse Magazine and collaborates with other magazines including Domus and Art Press.

For this project, Heitzler has borrowed and reconstituted footage from three artists' films produced in the early 1970s: Spiral Jetty (1970) by artist Robert Smithson, Crystal Voyager (1973) by California surf filmmaker George Greenough and the experimental film, La Region Centrale (1970) by Michael Snow. By presenting these films side-by-side and with overlapping audio, Heitzler raises both structural and conceptual associations between seemingly disparate projects. Each of the appropriated films marks a moving away, or a moving on, whether from the constraints of the gallery, the rules of filmmaking, or the physical departure from the crowded surf of the beaches of Santa Barbara. Each also employs new technologies and filmmaking devices to facilitate this shift from pre-existing norms, while highlighting the filmmakers' utopian desires of the arresting of time and space.

Robert Smithson's Spiral Jetty documents the construction of the artist's site-specific land art installation in the Great Salt Lake of Utah, shot with a camera mounted in an overhead helicopter. The path of the overhead camera begins to synch with the movements found in La Region Centrale, Michael Snow's experimental film shot entirely by a mechanical swing arm and the cascading and hypnotic camera movements in George Greenough's groundbreaking surf film, Crystal Voyager. Greenough revolutionized California surf films by inventing wave-riding machines that facilitated the filming of a surfing experience previously only known to riders, earning his film a place in the 1973 Cannes Film Festival.

The pairing of these three particular projects speaks to Heitzler's interest in identifying the zeitgeist of an era; that is, the moment when the sixties lapsed into the seventies and experimental filmmaking was at a precipice.

This work is being exhibited concurrently at Renwick Gallery, New York on view through July 29, 2011.