For the exhibition the artist presents new large-scale paintings, relief panels, and a selection of works on paper. All of the works in the show are derived from small cultivated accidents. 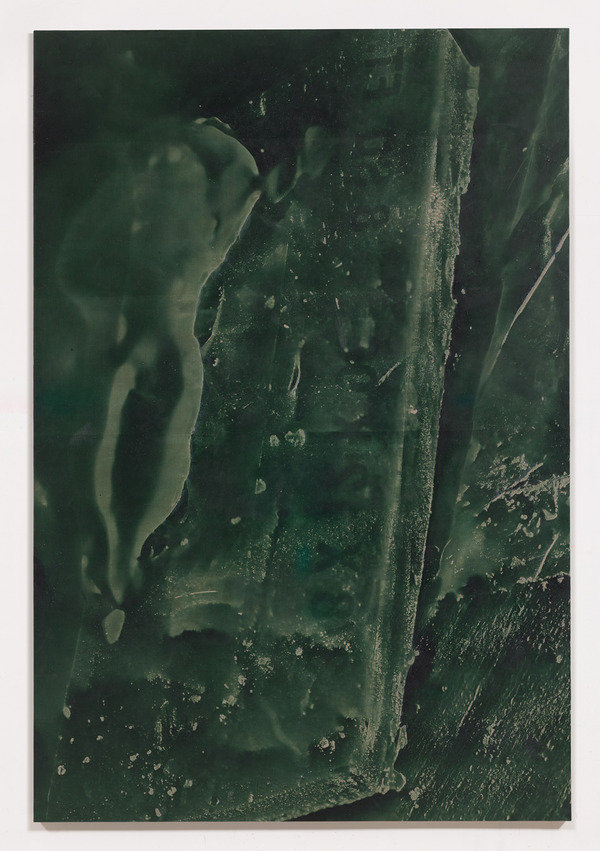 Blum & Poe is pleased to present Daniel Lefcourt’s first solo exhibition at the gallery, which includes new large-scale paintings, relief panels, and a selection of works on paper. All of the works in the show are derived from small cultivated accidents created in the studio – a puddle of water and glue spilled on a debris-covered tarp or a spot of paint dropped arbitrarily on a board. Measuring no more than a few inches, the scenes are digitally photographed dozens of times from a number of angles to generate a 3-dimensional computer model, from which a low-relief foam carving is manufactured. Paint is poured into the low-relief mold, allowed to dry, peeled off, and adhered to a large canvas. The final result of Lefcourt’s technique is a set of spectral images with an intense physical presence.

Daniel Lefcourt was born in New York, where he currently lives and works. He received his MFA from Columbia University and is a member of the faculty at the Rhode Island School of Design. His work has been included in numerous group exhibitions, including First Among Equals, Institute of Contemporary Art, Philadelphia, PA; Reel to Real: Photographs from the Traina Collection, de Young Museum, San Francisco, CA; Knight's Move, Sculpture Center, Long Island City, NY; Subject Index, Malmö Konsthall, Malmö, Sweden; and The Gold Standard, MoMA P.S.1, Long Island City, NY. A recent web project, Modeler, was commissioned and presented by Dia Art Foundation.

'At a data visualization conference a few years ago, a colleague passed me a piece of paper with an Internet address written in nearly illegible handwriting. The address didn’t start with “http://www”; instead it was a protocol I had never used. I showed it to a tech savvy friend, who suggested I only visit the link anonymously. Curious, but not knowing what I would find, I decided I better not use my home network. I went to one of the remaining public libraries in the city and opened the TOR network on my tablet.

What I found was a database of JPEG, AVI, PDF, DXF and GIS files, along with an antique Google maps-like application that allowed one to zoom in and out of high-resolution satellite images of various locations using pinching gestures. I ran my fingers over the terrain, which was labeled in a code unknown to me. A quick search revealed there were hundreds of thousands of items in the database.

The first file I opened was a PDF document on the history of photogrammetry – a technique in which photographs are used to measure scale and distance. Another query brought up a PowerPoint presentation on model making and subtractive manufacturing. There were documents and examples of the relationship between pantographs and “point clouds.” There were also thousands of files that contained soil sample data and information from a materials library.

The most memorable files were video stills that appeared to have been captured directly from satellites or unmanned aircraft. They were what filmmaker Harun Farocki has called Operative Images – images that exist merely to gather data. Some of the content was deeply upsetting, though it was unclear to me at the time if the stills were simulations or not. These files were the exception though – the majority of the content had to do with techniques for input, processing, and output.

On my next visit to the library, the database was empty. The interface was there, but the content failed to load. The screen stopped responding to my touch. As I closed the browser, and wandered through the library stacks, I realized that I had stumbled upon something significant – perhaps, this could be a useful methodology…. The database was an allegory…. Maybe I have to enact a similar set of operations….'Daniel Lefcourt