Supreme Fiction. By using the historical idiom of still-life as the anchor, the artist mashes the heroics of action-painting with the humility of vanitas tableaux. 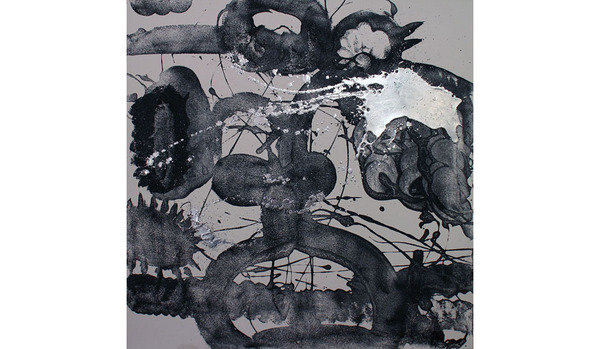 The unrestrained brushwork in Howe’s anarchic paintings inject raw emotion into docile subject matter, like flowers in a vase. By using the historical idiom of still-life as the anchor, Howe mashes the heroics of action-painting with the humility of vanitas tableaux.

Rather than focus on intimate observation, Howe operates on memory and feeling to invest mutable mediums with immense physicality. Pushing buckets of clear gloss over titanium molding paste, nascent forms become visible only after a dusting of carborundum grit (traditionally used to smooth lithography stone) and a final sweep of a broom. A self-proclaimed materials fiend, Howe also experiments with mica interference pigment suspended in acrylic resin to lend a refractive, iridescence to the canvas ground.

While the works explode with movement and texture, Howe restricts herself with respect to color. A stark palette emphasizes the expressive, psychological gestures seemingly unleashed during manic creative outputs. Howe qualifies the entire process as one of alchemy. As Michéle C. Cone writes in a recent catalogue essay, “Maybe, Howe’s evocative paintings are not about still life per se, but about the naming of things transposed into paint, and the magical interaction between medium, memory and perception.”

Born in Western New York in 1959, Howe received an MFA from SUNY Buffalo in 1983. The many publications that have reviewed her work include Art in America, Artforum, Art Critical, The New York Times, The New Yorker, and the Los Angeles Times. Howe has exhibited throughout the United States and Europe for over twenty years, including shows at the Corcoran Gallery of Art in Washington, DC, MoMA PS 1 in New York, and the Albright-Knox Art Gallery in Buffalo.

Gallery Hours:
Tuesday - Saturday
from 10am until 6pm