'Frontiers of Another Nature' is a unique selection of Icelandic photographic and multimedia artists who repeatedly integrate landscape and man-made environments in their work. The exhibition explores how the photographic arts are essential to examine the undeniably complex relationship of Icelanders to their natural environment. The Frankfurter Kunstverein presents the first major solo exhibition in Germany of Icelandic artist Ragnar Kjartansson: 'Endless Longing, Eternal Return'. Kjartansson incorporates elements from visual art, music as well as theater into his work, which takes the form of happenings, installations, drawings, photographs, and videos. His works range from regional folk tales to cliches of pop culture, and they offer views of history and the present that are simultaneously enchanting and nightmarish. 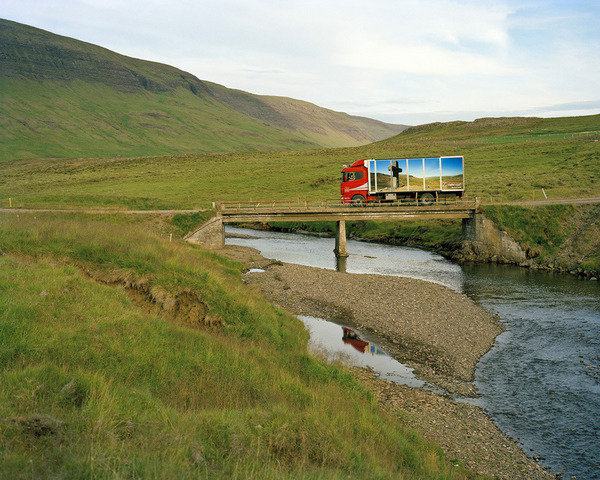 Frontiers of Another Nature -
Contemporary Photographic Art from Iceland

"Frontiers of Another Nature" is a unique selection of Icelandic photographic and multimedia artists who repeatedly integrate landscape and man-made environments in their work. The exhibition explores how the photographic arts are essential to examine the undeniably complex relationship of Icelanders to their natural environment. "Frontiers of Another Nature" will thus introduce ambiguous environments in which the photographers themselves investigate and build visual narratives around the expanse of land, or the loss of it. Here, the landscape often acts as metaphor for desire, alienation, magnificence and awe, tradition, irony, rebellion or achievement.

Some of the artists specifically work within the expansive borders of city life in regard to the extreme economic changes the country has seen in the last 10 years. The youngest artist, Ingvar Högni Ragnarsson (born 1981), for example, has photographed a fence built around a construction site in Reykjavik over a year's time as if it were a wall dividing social, technological or even political worlds.

Irony and yearning are imbued in Hrafnkell Sigurðsson's (born 1963) series of different snow mounds created from shoveled remains of snow in parking lots or street sides. A child might love to climb these urban landscapes but the more experienced passerby yearns for summer or a real mountain escape.

The photographer Bára Kristinsdóttir (born 1960) leads us to the remnants of what is a surreal world for non-Icelanders and a very essential phenomenon for Icelanders: the geothermal greenhouses.

Haraldur Jónsson's (born 1961) ongoing series TSOYL (The story of your life) is a constellation of man-made treasures in suburban landscapes or the discoveries made during uneventful journeys. In his photographs, he embraces the uncertainty of nature and casts doubt on the idyllic.

Vagueness plays a key role in the work of Katrin Elvarsdóttir's (born 1964) images "Nowhere Land". The uprooted decomposing trees are evidence of the extreme internal forces shaping the land but have been photographed in a mysterious atmosphere.

Between 2003 and 2009, Pétur Thomsen (born 1973) made his work "Imported Landscape" about the Kárahnjúkar Hydroelectric Project in eastern Iceland, which through its construction created an artificial lake that has spoiled the largest body of wild nature in Europe. The large color photographs are seductive with their patterns, the unexpected scale of objects and with textures that reveal the monumental and aggressive engineering involved in building the new power plant.

In "Mother Earth" the artist trio Icelandic Love Corporation (Sigrún Hrólfsdóttir, born 1973; Jóní Jónsdóttir, born 1972; and Eirún Sigurðardóttir, born 1971) created an outdoor sculpture in the form of a triangular "play" button. Over time and due to the natural circumstances, the sculpture changed appearance, which is documented from above with an automatic camera. This combination of Land Art and photography act as a signal of the creative and destructive powers of Mother Nature and appears as a warning not only to earthlings but possibly even extraterrestrials.

The works of Einar Falur Ingólfsson (born 1966) are a selection of his landscape photographs which he began in 2007 as a dialogue with artworks made by the English painter William Gershom Collingwood, who travelled extensively through Iceland in 1897, painting locations which are depicted in well-known Icelandic sagas. Long inspired by the sagas for past projects, Einar Falur Ingólfsson has symbolically created a 21st-century visual guide to the sagas, painstakingly researched and photographed with a 4 x 5 inch view camera.

The photo artist and filmmaker Spessi (born 1956) contemplates specific places and documents them voraciously. He draws not only on aspects of environmental and landscape photography but analyzes places as a portrait of modern lifestyle. He seeks out how human nature changes the nature, uses it and defines environments.

The Exhibition is a production of the Fotografie Forum Frankfurt in cooperation with the Frankfurter Kunstverein. It has been made possible with the support of the Kulturamt Frankfurt am Main and is part of the arts and culture program "Fabulous Iceland-Guest of Honour at the Frankfurt Book Fair 2011".

On the occasion of Iceland's invitation as guest country of the Frankfurt Book Fair, the Frankfurter Kunstverein presents the first major solo exhibition in Germany of Icelandic artist Ragnar Kjartansson (born 1976).

Contemporary Icelandic art is often characterized by intermedial and interdisciplinary approaches. Many artists work simultaneously with moving video images and still photography, sound and electronic ambient music, performances and situational actions, which develop into installations or arrangements of objects. Ragnar Kjartansson also incorporates elements from visual art, music as well as theater into his work, which takes the form of happenings, installations, drawings, photographs, and videos. His works range from regional folk tales to clichés of pop culture, and they offer views of history and the present that are simultaneously enchanting and nightmarish.

Ragnar Kjartansson describes himself as an incurable romantic, whose multi-faceted artistic practice is rooted in the tradition of existential performance. Reduced to the supposed core of an existential statement, many of his works thus concern literary, musical, or gestural moments of emotion or pure expression performed or endured to the point of exhaustion. Often these are sung spiritual exercises through which he suspends himself-and his audience-in an ambivalent state entailing happiness and mourning, beauty and horror, humor and drama, significance and entertainment. The use of repetition and time loops and associated themes of duration and perseverance are at the core of his works, and they push him and his audience to their physical and mental limits. In creating a context for his works Kjartansson often quotes stereotypical spaces or situations that readily serve as a backdrop for the great performance, the historical event, or the fateful moment. The artist has already made appearances as a knight, dandy, rock star, revolutionary, and even as an incarnation of death-and of course, as in his month-long continuous performance at the Icelandic Pavilion at the Venice Biennale in 2009, as an artistic genius obsessed with the search for the ultimate image. Ragnar Kjartansson creates loops constituting an endless tragicomedy that never seems to arrive at a point of resolution. Time does not stand still, but it is unable to transcend repetition.