A Retrospective, 1969-1994. Featuring more than 300 works, an exhibition celebrating the groundbreaking work of the seminal Canadian artist group: the collaboration between AA Bronson, Felix Partz and Jorge Zontal. The group's transgressive concepts and provocative imagery challenged social power structures and traditional modes of artistic creation in ever-shifting ways, until Partz and Zontal's untimely deaths in 1994. The show is organized around 5 themes: the artist, glamour and the creative process; mass culture; architects/archaeologists; sex and reality; and AIDS. 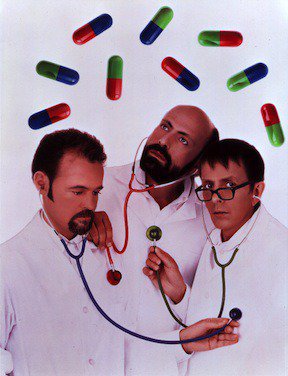 The Art Gallery of Ontario (AGO) will open an exhibition of unprecedented scale that celebrates the work of the Canadian artist group General Idea. Occupying more than 20,000 sq. ft. of Gallery space on the fourth and fifth floors of the AGO’s Vivian & David Campbell Centre for Contemporary Art, Haute Culture: General Idea — A Retrospective, 1969 – 1994 will be on view July 30, 2011, through January 1, 2012. The exhibition features 336 works by the groundbreaking multidisciplinary group, including 107 works from the AGO collection, spanning their prolific and influential 25-year career.

“General Idea is a truly seminal Canadian artist group whose diverse and increasingly influential production warrants deep and comprehensive consideration,” says Matthew Teitelbaum, the AGO’s Michael and Sonja Koerner Director, and CEO. “We are so pleased to mount an exhibition of their work on this large a scale, as I know that our visitors will find their exuberant and exacting vision to be intensely rewarding.”

Haute Culture is organized around five themes central to the trio’s production: “the artist, glamour and the creative process”; “mass culture”; “architects/archaeologists”; “sex and reality”; and “AIDS.” In addition to the works on view inside the exhibition, the AGO will install the artists’ two-metre-tall AIDS sculpture at the corner of Dundas West and Beverley streets. The lacquered metal sculpture, created in 1989, is based on Robert Indiana’s 1970 LOVE sculpture and will be on view throughout the exhibition’s run. Other highlights of Haute Culture include:

* a selection of works that have not been exhibited in more than 25 years, including the installations Playing the Triangle, P is for Poodle and XXX (bleu).
* documentation of The 1971 Miss General Idea Pageant, a performance originally staged in the AGO’s Walker Court, including a recently rediscovered 12-minute video clip from the performance;
* Mondo Cane Kama Sutra, a gallery of 10 2.5 x 3-metre paintings depicting three neon-coloured poodles engaged in a variety of sexual positions;
* elements from The 1984 Miss General Idea Pavillion, including The Boutique, a dollar-shaped sales counter displaying various artist multiples, and Test Pattern: TV Dinner Plates from the Miss General Idea Pavillion, an installation of 432 wall-mounted porcelain plates with television-style colour bars printed on them;
* numerous large-scale photographic works, including Nazi Milk, P is for Poodle and Baby Makes 3; and
* elements of their AIDS project, including paintings and wallpaper, which will be installed throughout the exhibition, recalling the posters, paintings, stamps and other iterations of the image that were circulated worldwide in the late 1980s and early 1990s.

“Through a prolific creation, General Idea’s body of work reveals a complex combination of reality and fiction, and of parody and rigorous cultural critique,” says Bonnet. “Treating the image as a virus that infiltrates every aspect of the real world, the group set out to colonize it, modify it and so present an alternate version of reality. Their visionary influence has only become more apparent with the passage of time.”

Haute Culture was first exhibited at the Musée d’Art moderne de la Ville de Paris, from February 11 to May 29, 2011. The AGO’s presentation of the exhibition is curated by David Moos, the Gallery’s former curator of modern and contemporary art, and Georgiana Uhlyarik, the AGO’s assistant curator of Canadian art.

A 224-page hardcover catalogue has been published to coincide with the exhibition. Edited by Bonnet, General Idea features more than 200 colour and black-and-white reproductions and includes contributions from Bonnet, Bronson and Moos, among others. Published by JRP|Ringier and distributed by Distributed Art Publishers, the publication is available at shopAGO for $44.

AGO members receive exclusive early access to Haute Culture at the Members’ Preview on Wednesday, July 27, from 10 am to 8:30 pm. AGO members receive unlimited free admission to the AGO’s permanent collection, among other benefits and discounts.