1040M Underground. Two new site-specific installations, including a new series of gunpowder drawings produced on the Izolyatsia campus. The artist will work closely with local painters, miners and volunteers to create these drawings on paper. 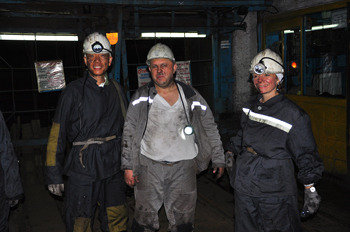 Cai Guo-Qiang – 1040M Underground opens on Saturday, 27 August through Sunday, 13 November 2011 at IZOLYATSIA. Platform For Cultural Initiatives in Donetsk. This marks Cai Guo-Qiang’s first solo exhibition in Ukraine and will feature two new site-specific installations, including a new series of gunpowder drawings produced on the IZOLYATSIA campus. The artist will work closely with local painters, miners and volunteers to create these drawings on paper. The production process will be open and free to the public, and audience members will be able to witness an artist at work and experience the ignition of the gunpowder drawings.

Cai Guo-Qiang – 1040M Underground stems from the artist’s experience in May to the coal and salt mines of the industrial Donbas region. Cai descended 1040 meters below ground level and trekked more than 1000 meters in the tunnel, mirroring the same route the coal miners take every day. After his “journey to the center of the earth,” a hike to the top of the IZOLYATSIA terrekon—as “slag heaps” are known colloquially—unveiled a breathtaking view of the city: white smoke from factory chimneys, a bright orange waterfall of molten steel glistening in the sunset, and statues of coal mining heroes standing tall all over the city.

The first element of the exhibition, Monuments on Shoulders, is a gunpowder drawing installation in the main gallery. The gunpowder drawing making process will take place in front of a live audience. Cai will first lead nine local Socialist Realist painters to sketch 27 mine workers’ portraits in the lobbies of the salt and coal mines. Volunteers will then help carve the images into stencils and Cai will spread different grades and grains of gunpowder onto the canvases in order to achieve different effects. All 27 portraits will be ignited. The finished drawings will be mounted on frames identical to the ones used to hold the portraits of Soviet leaders in propaganda parades, spreading across a mound of coal to the left and a slope of salt to the right in the gallery. The drawings will be lit with mining lamps, hanging from the ceiling like stars.

Nursery Rhymes, the second component of the exhibition, will be situated in the remnants of a factory building (Shop 2) destroyed by a fire. When visitors enter the space, they will be instantly drawn to the soot-covered interior of the building. Under dim lighting, nine used mining carts line up as if meandering down the track in the tunnel, rocking slowly like cradles. Each “cradle” contains a projection on the canopy: Ukrainian folk songs, Soviet era athletes and other role models, communist propaganda films, documentaries on the glorified lives of miners, and Socialist period art films. Along the sides of the canopy will hang salvaged objects from the days of the factory, such as old musical instruments from the factory club, tiny chess boards from the factory kindergarten, and old workers’ uniforms and tools, all rocking along like a child’s mobile.

IZOLYATSIA. Platform for Cultural Initiatives (www.izolyatsia.org) is a multidisciplinary art foundation located on the territory of a former insulation materials plant in Donetsk, eastern Ukraine. IZOLYATSIA's mission is to preserve the region's industrial heritage, and to inspire social and cultural development through the process of cultural conversion. The foundation's activity is focused on the realisation of site-specific projects, involvement of local community and education.

To receive press-info and images, please send
a request to tetyana.filevska@izolyatsia.org.

For accreditation to the preview and opening reception on 26 August, please send a written request to tetyana.filevska@izolyatsia.org.