Vanuit Hier - Out Of Here

Three exhibitions celebrate the 75th anniversary of the Van Abbemuseum. They all focus on the vital relationship of the museum with artists and art lovers from the local area and see the city of Eindhoven as a source of artistic inspiration. They are: The Collectors Show; 'For Eindhoven' - The City as Muse; And on Sundays we celebrate Friday - solo presentation Dick Verdult. 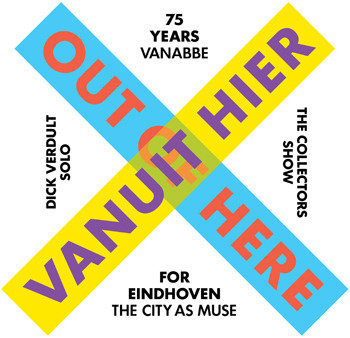 Celebrating the 75th anniversary of the Van Abbemuseum, three exhibitions are opening on Saturday 3 September 2011. They all focus on the vital relationship of the museum with artists and art lovers from the local area and see the city of Eindhoven as a source of artistic inspiration. The museum has been bringing international contemporary art to Eindhoven for three quarters of a century. It has built up an international position, partly due to the productive links with the immediate artistic environment. Artists, collectors, governments and various public groups have created close connections with the museum. They are an important foundation for its existence and quality. The Van Abbemuseum is keen to enter a debate with people who support, challenge or question the museum's ambitions. Each of the three exhibitions which comprise VANUIT HIER – OUT OF HERE focuses on the significance of artists, collectors and the city of Eindhoven for the Van Abbemuseum in its own way.

VANUIT HIER / OUT OF HERE consist of three exhibitions:

'For Eindhoven' - The City as Muse
Curated by Annie Fletcher

This exhibition shows how artists are influenced by the characteristic qualities of the city as a centre for industrial production, a focus of innovative knowledge and expertise or a classical example of mid-20th-century town planning. Sometimes the artist responds directly to an existing reality while others take the collection of the museum as a starting point to reflect on art or develop works together with the local population. The exhibition has both older works—often reconstructed for the first time—and more recent reflections on Eindhoven and the role of the museum in the city.
Artists a.o.: Gerrit van Bakel, Stanley Brouwn, Gerard Byrne, Phil Collins, Jan Dibbets, Joost van Roojen & Aldo van Eyck, General Idea, Rodney Graham, Hans Haacke, Donald Judd, Annette Krauss & Petra Bauer, Richard Long, Matt Mullican, Jason Rhoades, Stephen Willats.

The Collectors Show
Curated by: Christiane Berndes, Charles Esche
The museum has invited ten collectors who are closely involved with the Van Abbemuseum to share their personal passion for the arts with the public. In The Collectors Show they show some of the prized works from their own private collections to the outside world, often for the first time, and they explain their choice in a video interview which forms part of the exhibition. The museum itself also made a selection from these collections.

And on Sundays we celebrate Friday—solo presentation Dick Verdult
If there is one artist from Eindhoven who makes local and international connections and serves as a model of disciplinary and cross-border diversity, it is Dick Verdult. Verdult is a member of the important generation of artists who emerged in the 1980s and also included René Daniëls and Henk Visch. The exhibition, with mainly new works, shows how Verdult explores the tensions between the normal and the unusual, the chic and the everyday, using very diverse mediums.

Subsidisers
VANUIT HIER – OUT OF HERE has been realised in part by contributions by VSBfonds and CityDynamiek Eindhoven. BankGiro Loterij contributed to 'For Eindhoven'- The City as Muse and Fonds BKVB contributed to the exhibition And on Sundays we celebrate Friday.