The Spiral and the Square 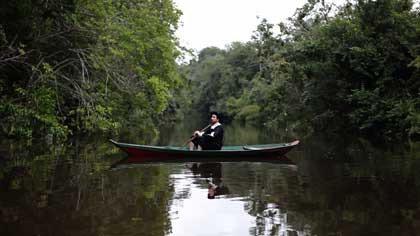 What happens in translations between cultures, between languages, between a viewer and an artwork? In The Spiral and the Square, the works are varied exercises in translatability: Rivane Neuenschwander's phantom draughtsman translates the visitor's description of their first love into a portrait on paper. Cildo Meireles' simple paper bags are translated into a series of volume units. Laura Lima's living sculpture lends an image to the process of translation as a physical and demanding struggle. Cao Guimarães' full-length film Ex Isto challenges how history is written by transferring European historical events to the Amazon rainforest.

The spiral and the square borrows its title and structure from one of the story lines in Brazilian writer Osman Lins' cult novel Avalovara from 1973. The comprehensive narrative structure of the novel develops from the intersection between a spiral and a square—onto which is inscribed a mysterious palindrome in Latin. Circling around the dialogue of the two geometrical figures, Lins explicitly describes the spiral as the infinite, poetic and powerful antagonist to the enclosure of human creation, the square. Nothing is aleatory: one form needs the other not so much for reference, but simply for existing in the world. The square defines the space whereas the spiral acts as the forward moving force.

Bonniers Konsthall has invited Daniela Castro and Jochen Volz, both based mainly in Brazil, to curate an exhibition within the larger frame of a research project on translations and translatability with Brazilian culture as a focus. Departing from Osman Lins' novel, the curators aim to draw a parallel between issues of translation and artistic practice. The structure of Avalovara consists of eight different narratives broken into parts and shuffled so as to render a spiraling effect. Lins' effort to construct such a densely layered and complex architecture in writing emulates processes of translation. The curators' approach to translation defies the notion of the original and the other and instead focuses on the imaginative potential of translation as transformation, transmutation and as fictional writing.

The research project Translatability; aesthetics and the transformation of the public sphere in an era of globalization is a collaboration between Bonniers Konsthall, Aesthetic Department Södertörn University and Albert Bonnier Publishers. In addition to the exhibition, the project will also comprise scientific papers, a series of seminars and the anthology Exercises in Translatability (release October 2011) with new texts by and new translations of texts by Edouard Glissant, Aleksandar Hemon, Osman Lins and Jorge Luis Borges, Clarice Lispector, Vladimir Nabokov, Marcia Sá Cavalcante Schuback , Vladimir Safatle et al.

Find out more on bonnierskonsthall.se