Tracing the development of artist's work over the last decade, 'Charline von Heyl' consists of 18 paintings exhibited alongside collage-based works on paper. 'Blowing On A Hairy Shoulder' presents work by 20 international artists that examines the relationships between originality and origin. 'Bill Walton's Studio' recreates the unique environment of the minimalist artist. 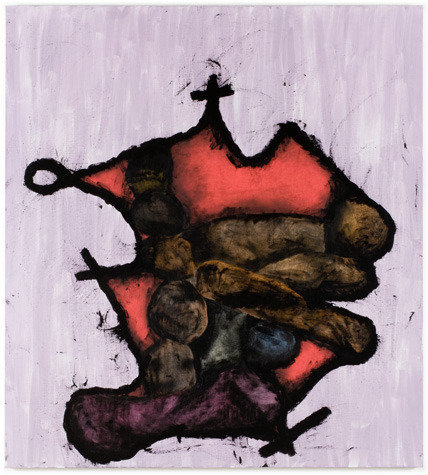 The Institute of Contemporary Art is pleased to present Charline von Heyl, the first museum survey of this compelling and important painter. Von Heyl is a painter whose vibrant, insistent, enigmatic work demonstrates that painting is still intensely relevant in contemporary art. Her paintings are not abstractions of objects or figures; instead, she is interested in creating a "new image that stands for itself as a fact." With their dynamic energy, their contradictions and reversals, and their intentional confusion of foreground and background, these paintings require (and desire) careful looking but refuse to yield to the impulse to name, identify, and define. As the artist says, "It is about the feeling that a painting, or any work of art, can give—when you can't stop looking because there is something that you want to find out, that you want to understand... Good paintings have this tantalizing quality. And once you turn around, you absolutely cannot recapture them. They leave a hole in the mind, a longing."

Tracing the development of von Heyl's work over the last decade, Charline von Heyl consists of 18 paintings exhibited alongside collage-based works on paper. Von Heyl's works on paper combine drawing, painting, woodcut, silkscreen, and lithography, and are defined by a wild overflow of energy. They are sometimes more conventionally legible than the paintings are, their source images less transformed. Von Heyl's drawings are sites of experimentation, extremely process-heavy, and composed through a playful method of trial and error. To chart the important visual relationships between the two mediums, von Heyl first included drawings alongside her paintings in a 2006 solo exhibition, a tactic that revealed that the drawings were a tool to explore not only ways of making but also ways of seeing—for both the artist and the viewer.

Charline von Heyl was born in Germany in 1960 and studied painting with Jörg Immendorff in Hamburg and Fritz Schwegler in Düsseldorf. She has lived in New York since 1996, and her work has been exhibited both in the United States and abroad, including solo museum exhibitions at Le Consortium, Dijon (2009), the Dallas Museum of Art (2005), and the Vienna Secession (2004). Group exhibitions include Oranges and Sardines: Conversations on Abstract Painting at the Hammer Museum in Los Angeles (2008), and Make Your Own Life: Artists In and Out of Cologne (2006), which was organized at ICA and then traveled to the Museum of Contemporary Art in North Miami and the Henry Art Gallery in Seattle. Von Heyl's works are in the collections of the Musee d'Art Moderne de la Ville de Paris; the Museum of Contemporary Art, Los Angeles; the Museum of Modern Art, New York; and the San Francisco Museum of Modern Art, among others.

This exhibition is organized by the Institute of Contemporary Art at the University of Pennsylvania by guest curator Jenelle Porter, Senior Curator, ICA/Boston.

A sculptural work by Mark Manders shows half-formed humans emerging from and into clay, exploring the myth of the earliest human making. In a similar vein, a video by Gilad Ratman, "The 588 Project," documents a natural mud pool with people, completely immersed, breathing through the tubes, revealing a startlingly contemporary look at life arising out of the mud. Imagery of fossils appears in the work of Tamir Lichtenberg and Yochai Avrahami, and of flame in pieces by Ariel Schlesinger and Carson Fisk-Vittori. "The Earth, the Sun, and the Moon," by Asaf Koriat, looks like a constructed archeological artifact and uses Israeli coins to represent part of the cosmos. Though not exclusively a show of Israeli artists, this show brings the inventive vitality of the Israeli art scene to the American public.

About Doron Rabina
Doron Rabina (b.1971) is an artist and among the leading curators and theorists of contemporary art in Israel. Formerly a consultant-curator for the Israel Museum in Jerusalem, he has organized many large scale exhibitions, such as: Beyond Guilt, Tina B Art Festival, Prague, Czech Republic (2009); Eventually We'll Die, Herzliya Museum of Art (2008); Power, Omanut Ha'aretz no. 4, Reading power station, Tel Aviv (2005). As an artist, Rabina represented Israel in the 26th biennale of São Paulo (Brazil) in 2004. Since 2009, he has held the position of Head of Hamidrasha School of Art, Beit Berl College, one of Israel's leading art colleges.

Blowing on a Hairy Shoulder / Grief Hunters is organized by Tel-Aviv-based artist and curator Doron Rabina and is accompanied by a fully illustrated catalogue.

The Institute of Contemporary Art presents Bill Walton's Studio in the Project Space. This exhibition recreates the unique environment of the minimalist artist, a key figure in the Philadelphia art community for nearly 50 years.

Walton, a commercial printmaker by trade and later an instructor at Moore College of Art and Design (1974-1990), was often more interested in the materials used for printmaking—wood, lead, steel—than in the finished product. His studio contained an exhibition area so he could display his work in progress in order to judge whether or not it was finished, a crucial part of his studio practice. At the time of his death in 2010, Walton's studio was a small miracle of order. Tools and materials were arranged as carefully as works of art. Indeed it was not always simple to tell the tools from the work, to judge whether an artful arrangement of screws and bolts was waiting to be used or to be admired.

ICA's exhibition catalogues, transfers, and displays the elements of Walton's studio, from finished work to workbench to cassette tapes and coffee cups. Using plywood slats and weathering techniques, ICA faithfully re-creates the studio's painted wooden floor, down to the way Walton filled the seams in the area that was his exhibition space.

In today's art world, where so many artists work digitally and conceptually, this installation gives visitors insight into the hands-on, craft-oriented way a traditional artist hones his craft.

This exhibition is organized by ICA Senior Curator Ingrid Schaffner, and is accompanied by a brochure publication.