The artist presents a new series of drawings on paper that circle around the theme of the artist studio. The series can be seen as a next step in Van de Velde's investigation of the possibilities to draw out a personal story based on existing images. 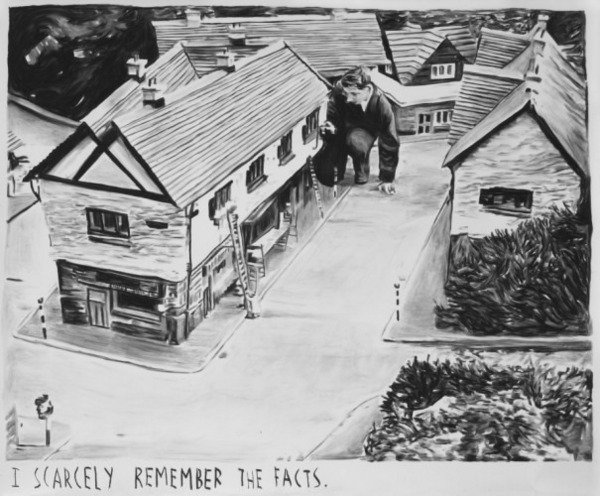 In his first exhibition at Tim Van Laere Gallery (8/9/2011–22/10/2011), Rinus Van de Velde (Leuven, 1983) presents a new series of drawings on paper that circle around the theme of the artist studio. The series can be seen as a next step in Van de Velde's investigation of the possibilities to draw out a personal story based on existing images.

Van de Velde lives and works in Antwerp and is considered to be one of the most promising young artists in Belgium. In his recent exhibitions (amongst others in Amsterdam, Berlin, Chicago, New York, Tokyo, Paris and London) he mainly designed installations in which he brought together several drawings to tell one open story. That story is part of a bigger, fictional autobiography that runs parallel to the development of the artist's real oeuvre. In this way, Van de Velde develops a universe of his own that nevertheless constantly relates to the broader (art) history.

The drawings that Van de Velde will show at Tim Van Laere Gallery, tell - unlike much of his recent work - stories that are to a certain extent autonomous and can be read apart from each other. The texts, which are written on the drawings themselves, relate about separate moments in a fictional artist's biography. The recurring theme is the meaning the studio has for the artist, but that subject matter is broadly interpreted, and is mostly employed as a narrative motor for a narration in which the artist imagines himself to have been an 'author' of twentieth-century art history. By doing so, Van de Velde creates an experimental fictional space in which he can, like a sponge, absorb artistic standpoints, without falling into the trap of becoming dogmatic. The viewer, on the other hand, is directly challenged to imagine the larger story of which Van de Veldes stories seem to be but snapshots.

Van de Velde's new series of stories have a layered set-up, and tend to fold back on themselves more than they used to. The text can sometimes at the same time be read as a story as well as a comment on the image. The drawings, on the other hand, often contain 'unreadable' elements, in which abstraction and plastic experiments take the upper hand. In this way, text and drawing seem to doubt whether they are a window to an imaginary world, or signs on a flat surface. (Koen Sels)