Ahora estare' con mi hijo (Now I shall be with my son). The Argentinian grant student, attended to Villa Raffet in February 2011 for the SAM Art Projects residency, show a large-scale sculpture in the Jardin des Tuileries. 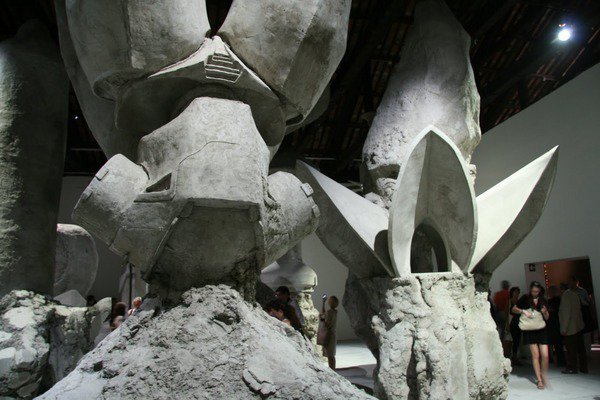 Each year, SAM Art Projects successively hosts, at Villa Raffet, two grant students from an "emerging" country who commit to producing a work during their time in Paris. This five-month residency is showcased in an exhibition, organised by SAM Art Projects.

The Argentinian artist Adrián Villar Rojas came to Villa Raffet in February 2011 and will show a large-scale sculpture in the Jardin des Tuileries from September.

Adrián Villar Rojas was born in 1980 in Rosario, Argentina. He divides his time between Rosario and Buenos Aires. He is represented by Galeria Ruth Benzacar.

A graduate of the Escuela de Bellas Artes in Rosario, and the Clínica de Artes Visuales del Centro Cultural Ricardo Rojas in Buenos Aires, he is representing Argentina at the 54th Venice Biennial, will take part in the Istanbul Biennial, will exhibit at the New Museum in New York in March 2012, and recently won the 9th Benesse Prize for Contemporary Art, awarded by the Futukame Foundation, Naoshima, Japan.

He will use clay, his preferred material, for the sculpture, which is currently in progress. It will be a continuation of the work presented at the Venice Biennial.

Adrián Villar Rojas' work is informed by contemporary literature, classical culture, science fiction, sequential art and grunge. His entire work addresses the fate of Humanity and questions of time: what would remain after the end of the world, the end of art. This work, like all his previous monumental sculptures, will be destroyed at the end of the exhibition.

His residency with SAM Art Projects will give rise to a publication in October.

The aim of the prize is to allow the selected artist to carry out a project which they will conduct in an emerging country in the Southern hemisphere, and exhibit in France, at the Palais de Tokyo in Paris, in the following year.

With its grant of 20 000 euros, this competition is open to all artists corresponding to each of the following criteria:

• over the age of 25
• french or who have been resident in France for at least 2 years
• who have a a signed contract with a gallery in France.

Every kind of expression and all the visual arts disciplines are accepted : painting, sculpture, installation, photography, video…

To apply, the artist should send their project—exclusively PDF document—at the latest september 15th, at the adress below:

This jury will meet and decide the shortlist late november and the prize-winner on the 15th December 2011.

SAM Art Projects was founded in April 2009 by Sandra and Amaury Mulliez to promote, support and defend contemporary creation in the plastic arts through a dialogue between France and the so-called "emerging" countries.

2. The SAM Award for Contemporary Art is presented each year to an artist living in France who has a project intended for one of these countries.

Each of these three artists benefits from an exhibition at a prestigious venue in Paris and a publication.