The American artist Chris Johanson is a self-taught product of San Francisco's skateboard and graffiti culture. He works in widely varying media such as painting, film, installation and music. The Japanese artist Misaki Kawai works with painting, drawing, sculpture, installations and artists' books. Her works are filled with colourful characters, that appear to come from the dream world of film, music and comics. 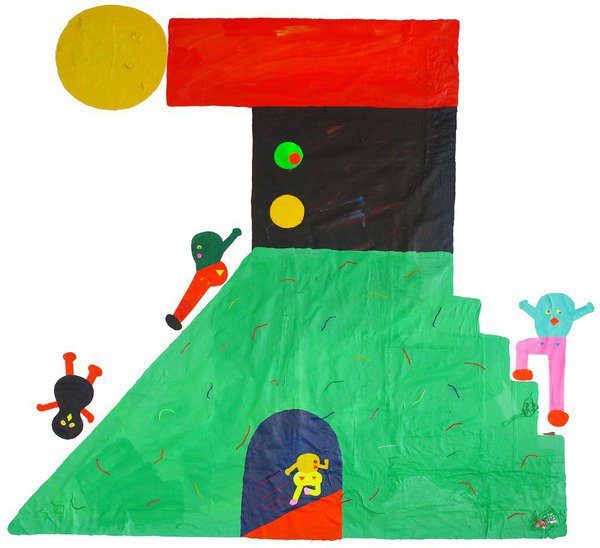 The American artist Chris Johanson (born 1968) is a self-taught product of San Francisco’s skateboard and graffiti culture. In his playful and humorous works he comments on what it is like to be human and live in today’s society. He works in widely varying media such as painting, film, installation and music.

Johanson grew up in a suburb of San José in California and began his artistic career as a teenager. He painted skateboards and made posters and flyers for his friends, and then gradually began using public space to comment on American society. Even his early drawings show a spontaneous and slightly naïve imagery. He still likes to work in public spaces such as department stores and bookshops or directly in the street environment while also exhibiting at established galleries and museums.

Johanson uses bright colours with a cartoon-like style. He is an acute observer, who in a simple and direct way conveys his observations to us. He still regards himself as somewhat of an outsider in the art world, and therefore does not feel bound by any pre-existing limitations. He enjoys exceeding boundaries – the paint spills outside his contour lines and the speech balloons are too small to contain his text.

In Johanson we encounter both the light and dark sides of society. Many of his drawings and paintings are bittersweet reflections about the small and large occurrences of daily life. He addresses important existential questions and ponders human relationships and the future of mankind. The environment has played an increasingly central role in his works, therefore he insists on using second-hand, found wood and discarded paint. Johanson tries to be a positive communicator, and his works are intended to function as a kind of alarm clock. He wants us to begin reflecting on our situation and how we live our lives.

The Japanese artist Misaki Kawai (b. 1978) works with painting, drawing, sculpture, installations and artists’ books. Her works are filled with colourful characters, that appear to come from the dream world of film, music and comics. Strongly influenced by today’s consumer society Kawai fuses East with West, humour with seriousness and dreams with reality. The result is both chaotic and exuberant.

Misaki Kawai has been drawing since she was very young, and the drawn line forms the basis of her work. She is influenced by the Japanese manga style called heta-uma, which means “bad-good” or bad technique with good result. It refers to the minimizing of conscious decision making or intentional stylization while drawing – a sort of uninterrupted connection from the brain to the hand. In her paintings, she uses a simple drawing line filling the areas with clear, strong colour to create and intensify moods and emotions in her pictures. There is a happiness and spontaneity. We encounter the same characters, animals and people who appear in her installations. Kawai deliberately works on the border to the banal, using an understated humour that indirectly reminds us of how our society functions.

Misaki Kawai has been living in New York since 2000. There she collects, as she does on her many trips abroad, ideas, materials and objects from markets and low-cost stores. Inexpensive things like mass-produced plastic toys, stickers, ceramic ware and fabrics. Her artists’ books are often decorated with patterned pieces of fabric or strings, making every book unique. They can be about the adventures of a Yeti warrior or be linked to her travels, such as Nepali Special or China Special. Her latest book project, Pencil Exercise, consists of 500 drawings that she produced in the course of a year, at least one every day.

In her playful installations, Kawai creates imaginative worlds in materials such as papier-mâché, wood, cardboard and fabric. These doll house-like universes feature an incredible wealth of detail. A recurring theme has been space and the futuristic worlds of tomorrow. All the colours, shapes, textures and patterns give her installations almost a kaleidoscopic effect, and it is difficult to withstand this hubbub of sweet, dream-like fantasy beings and colourful constructions. She always depicts places filled with movement, action and events. Kawai has said that she admires the action film star Jackie Chan because he is unique and cool. He is her sensei – her master.

For the exhibition at Malmö Konsthall, Misaki Kawai has created completely new works, including a large sculptural installation. She has been working on site in Malmö since June. During this time Kawai made a wall mural together with teenagers in Rosengård and created and painted a site specific work, Pineapple Paradise, for the gigantic skate board ramp at the Malmö Festival.

Kawai makes three publications for the exhibition Big Bubble. The exhibition catalogue will be in the form of a long-sleeved T-shirt in limited edition, a fanzine from the Rosengård project and last but not least Kawai has made the childrens book New Era Activities.