For his exhibition, curator Moritz Kung takes the 4 columns in the main gallery as his point of departure, and 'retroactively refurbishes' them. At the same time, he has selected works by 7 artists which are placed in this field of tension, allowing them to resonate associatively with the architecture, history and culture of the Secession. With: Luz Broto, Peter Downsbrough, Dora Garcia, Guillaume Leblon, Joelle Tuerlinckx, Cerith Wyn Evans, Heimo Zobernig plus Adolf Krischanitz, Moritz Kung, Ferdinand Schmatz, Margherita Spiluttini. 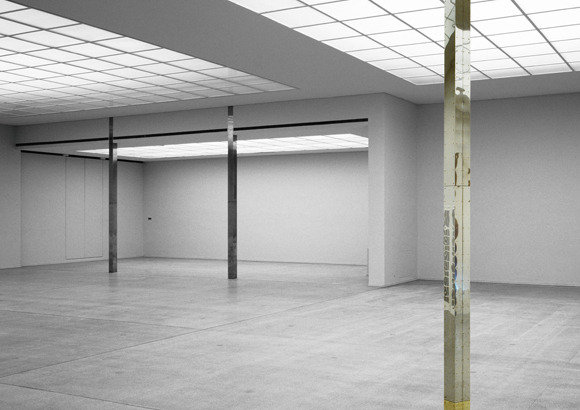 Since the overall renovation of the Secession building, undertaken in 1986 by the architect Adolf Krischanitz, its most significant structural elements comprise the four central columns in the main gallery. Originally made of nickel steel and brass, the columns have since 1989 often been covered, and, since 1991, they've been painted completely in white, probably in an effort to neutralize their willful presence as a misunderstood Otto Wagner quotation. For his exhibition, curator Moritz Küng takes these four columns as his point of departure, and "retroactively refurbishes" them to show the original shine they had twenty years ago. At the same time, he has selected newly produced or reconstructed works by seven artists spanning three generations, which are placed in this field of tension, allowing them to resonate associatively with the architecture, history, and culture of the Secession.

The symbolic fifth column thus stands for the realization and revitalization of the genius loci, which, consequently, also demonstrates a new interpretation of presentness and construction, of renovation, repair, supplementation, and adaptation, and ultimately also a new modernization.

Accompanying the exhibition are a catalogue with exhibition views, photographed by Margherita Spiluttini and with text contributions by Moritz Küng, András Pálffy and Ferdinand Schmatz (30 September 2011) as well as the artist books by Peter Downsbrough: a place—Wien (8 September 2011) and Joëlle Tuerlinckx: Les moments d'espace (17 November 2011).

Friday, 9 September 2011, 6:00 pm : exhibition discussion with Moritz Küng and Ferdinand Schmatz, moderated by Gabriele Mackert. An event organized by Friends of the Secession.