The exibithion "Patria o Libertad! On Patriotism, Immigration and Populism" features the work of 22 artists from diverse backgrounds, experiences and places of residence and takes on crucial issues and questions related to notions of nationalism. Duane Hopkins put on a show his full-scale installation project, Sunday, focused on the rural youth of his much-celebrated feature-film debut Better Things (2008) and his early shorts Field and Love Me or Leave Me Alone. Polish artist Artur Zmijewski's video Them, 2007, documents the results of a social experiment bringing together four different groups within Polish society. 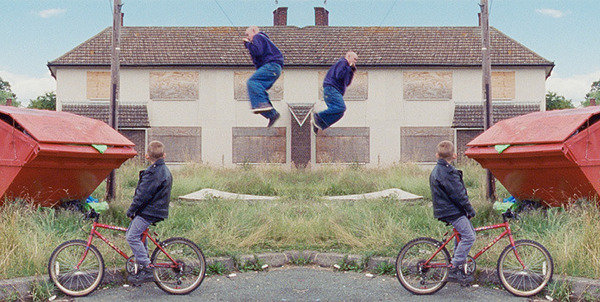 This critically engaged, all-video exhibition, (including two sound piece), featuring the work of 22 artists from diverse backgrounds, experiences and places of residence, takes on crucial issues and questions related to notions of nationalism in our era of fluid migrations shifting understandings of identity.

Is it wrong to be a patriot, to love your country or your roots? Patriotism manifests itself in multiple forms: some are benign and tranquilizing, others horrifying. The problem now is that "nationalism" or "bad patriotism" goes beyond a mere or positive appreciation of your homeland by stressing negative elements of identity and presupposing an iron loyalty that creates artificial divisions and makes it difficult to understand other singularities. We should not forget that throughout history "nation", "nationality" and "identity" have become negative, marking a clear line between a native and a non-native.
—Exhibition curator Paco Barragán

Presented throughout the gallery on projectors, monitors and flat-screens, the exhibition is conceptually structured under four distinct headings: PART 1: Tell us a Story, engages stories and discourses that exemplify contemporary patriotic storytelling; PART 2: Fly your Flag, showcases a series of performances in which the flag as patriotic paraphernalia serves as leit-motif; PART 3: Honour the Hero; gathers works around a series of heroes and characters that conform to past and present patriotic histories; and PART 4: Love thy Anthem, contains a series of works that deal with national anthems and songs that constitute a key element of patriotic narratives.

¡Patria o Libertad! invites viewers to consider the current state and implications for the future of patriotism and nationalism in a rapidly and increasingly globalized world.

Organized by the Museum of Contemporary Canadian Art, Toronto and the Cobra Museum, Amsterdam.

UK director Duane Hopkins' full-scale installation project, Sunday, is both an extension of his previous films and a haunting, elegiac projection-based work in its own right. Consisting of a series of subtly looped diptychs and triptychs, Sunday focuses on the rural youth of his much-celebrated feature-film debut Better Things (2008) and his early shorts Field and Love Me or Leave Me Alone. Hopkins captures the ennui, sadness and beauty of isolated adolescence in painterly tones and colors that recall the British Romantics, while twinning and reconceptualizing his landscapes to evoke the brooding, twitchy surrealism of the ever-encroaching contemporary world. Sunday builds to a climax of poignant helplessness, a politics of alienation that presages the violence and turmoil engulfing England this summer.

Presented in collaboration with the Future Projections programme of the Toronto International Film Festival.

Polish artist Artur Zmijewski's powerful video Them, 2007, a highlight of Documenta 12 in Kassel, Germany, in 2007, documents the results of a social experiment bringing together four different groups within Polish society. As with many of Zmijewski's projects, Them engages directly with dogma and prejudice to reveal profound insights into human behaviour and relationships.

Organized by the Museum of Contemporary Canadian Art and the National Gallery of Canada.

Artur Zmijewski | Them is presented as part of the three year National Gallery of Canada at the Museum of Contemporary Canadian Art program that will see the two institutions co-organize and co-present a series of exclusive exhibitions in MOCCA's newly-renovated project space, drawn from the NGC's extensive contemporary art collection. These will include the presentation of single works, new acquisitions or full-scale exhibitions designed to complement MOCCA's existing programming.

All programs and activities at the Museum of Contemporary Canadian Art are supported by Toronto Culture, the Ontario Arts Council, the Canada Council for the Arts, BMO Financial Group, individual memberships, and private donations.