The exhibition presents a comprehensive survey of the artist's career, including key examples of her different phases from 1960 well into 2002.This retrospective brings together the various facets of Saint Phalle's oeuvre: from the aggresiveness and harshness of her early work to the more jaunty and balanced nature of her later work. 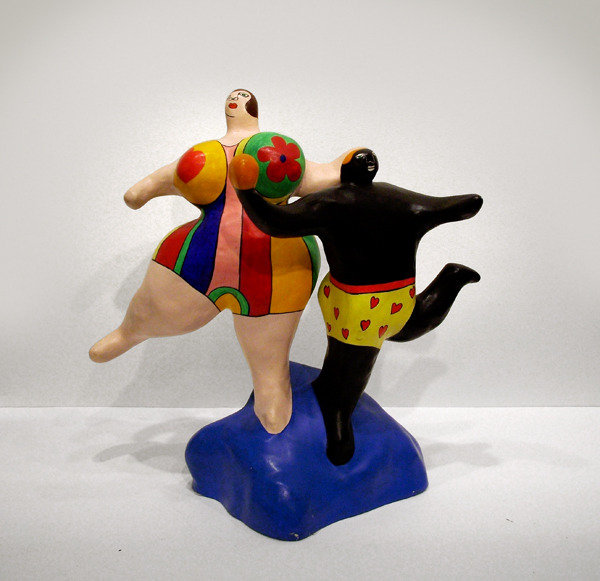 A major retrospective exhibition spanning 44 years by Niki de Saint Phalle will be on view at Nohra Haime Gallery from September 7 through October 29. The exhibition will present a comprehensive survey of the artist’s career, including key examples of her different phases from 1960 well into 2002.

Among the works featured are assemblage pieces of found objects including her acclaimed shooting target pieces from the early 1960s, the Skinnies (lamps) – linear flat sculptures from the 1980s, multiple flower vases and whimsical furniture with figurative forms from the 1980s and 1990s, sculptural figures brilliantly colored with mirrored mosaics, her all-powerful Nanas, as well as a selection of psychedelic works on paper.

ighlights of the exhibition include Tir Aux Ciseaux, 1961, an assemblage of found everyday objects embedded in plaster and then shot at. The inventory of sharp violent objects incorporated in this work, including scissors, nails, and cracked pieces of glass, and the dripping dark red color reminiscent of blood, reveal the artist's wounded soul and gloomy state of mind at the time. Another prominent piece is Chapelle ou Hommage à la Vie, 1974, most likely conceived as an architectural fantasy; it is an anthropomorphic sculpture in painted polyester and executed in her distinguished naïve, yet clever style.

Tete de Mort, 1988, in which Jean Tinguely collaborated, has a Tinguely machine and a plant over a Saint Phalle skull. Les Trois Graces, 1994, a central focus of the exhibition, consists of three spirited, bright-coloured, voluptuous Nanas dancing in a circle; they represent the independent, joyful, creative and powerful mother figure.

This retrospective brings together the various facets of Saint Phalle's oeuvre - from the aggresiveness and harshness of her early work to the more jaunty and balanced nature of her later work. Viewers are confronted with contradictions of past and present, love and hate, fantasy and reality, chaos and harmony, protest and liberation, and grief and celebration. Saint Phalle's art is a reflection of her dark, yet extravagant personal history. After having a nervous breakdown and receiving electric shocks in a psychiatric hospital in 1953, she began painting as a form of self-therapy to express her fear and rage. But as in fairy-tale ending, Saint Phalle countered her demons and embraced magic and color of life through art - the path she followed to do so is palpable in the exhibition.

Niki de Saint Phalle (1930-2002) was a French-American, self taught sculptor, painter and film-maker of international prominence. Some of her best known public sculptures areThe Stravinsky Fountain next to the Centre Pompidou in Paris (1983), The Tarot Garden at Garavicchio in southern Tuscany (1998), The Grotto in Hannover's Royal Herrenhausen Garden (2003), and the Queen Califia's Magical Circle in California (2003). Saint Phalle, who began her career as an artist in the 1950s, was awarded in 2000 the 12th Praemium Imperial Prize in Japan, considered to be the equivalent to the Nobel Prize in the art world. Born in 1930, in Neuilly Sur Seine, Saint Phalle died in 2002, at the age of 71 in La Jolla, California.

Further events held in conjunction with this retrospective will include the screening of the documentary Niki de Saint Phalle: Introspections and Reflections, 2003, 35', written, filmed and edited by André Blas, which focuses on the fascinating life and art of the artist, a conversation with Bloum Cardenas, grandaughter of Saint Phalle and Head of the Niki Charitable Art Foundation, and "Come in Saint Phalle's Whimsical Characters Costume Party." Dates for all events will be provided when the time nears.