The exhibition gives a comprehensive view of the acquisitions accumulated by the Rupf Foundation since it was established. It focused especially on purchasing contemporary art. Besides key groups of works by Picasso, Braque, Klee, or Kandinsky, the foundation holdings also include artists such as Markus Ratz, Meret Oppenheim, Vaclav Pozarek and Florian Slotawa. 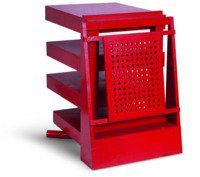 "Rectangle and Square" – From Picasso to Judd – Rupf Foundation Acquisitions

At the beginning of the 20th century, Hermann and Margrit Rupf laid the foundations for a collection now seen as one of the leading of its kind for European modern art. Not only the vast number of high-profile artworks makes this collection remarkable but also the fact that Hermann Rupf acquired the majority of them in the same year they were executed. Because a foundation was established in the Kunstmuseum Bern in the 1950s, the collection is open to the public and, right up to the present, being constantly enlarged. The exhibition “Rectangle and Square”. From Picasso to Judd – Rupf Foundation Acquisitions will, for the first time, give a comprehensive view of the acquisitions accumulated by the foundation since it was established.

The foundation focused – like the collector couple had previously done – especially on purchasing contemporary art. Today its holdings reflect not only a fascinating overview of one hundred years of art history but also display the preferences of the private collection.

Besides key groups of works by Picasso, Braque, Klee, or Kandinsky, the foundation holdings also include superb minimal, concrete, and Group Zero art, as well as work by esteemed individual artists such as Markus Rätz and Meret Oppenheim.

A group of artworks by the conceptual artist Vaclav Pozarek (resident in Bern) and by Florian Slotawa is among the foundation’s most recent acquisitions. Both artists explore art concepts and strategies foregrounding the object and space, thereby presenting a compelling sequel to Hermann Rupf’s emphasis on collecting cubist art.