A Terrible Beauty Is Born. This edition includes around 70 artists from around the globe, primarily from Europe, Africa and Latin America. The title is a verse from the poem Easter 1916 written by W.B. Yeats in September of that year about the general uprising by which the Irish claimed emancipation from the British. It enables the project to explore the force of paradox and contradiction, tension and ambivalence, and to address the state of urgency in the world and in the arts today. 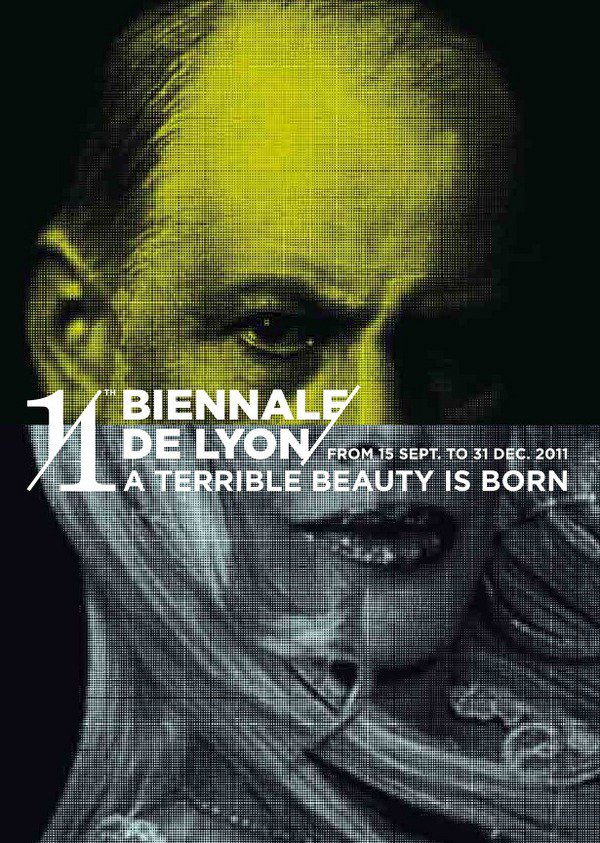 The title of the next Biennale de Lyon, A Terrible Beauty Is Born, is a verse from the poem Easter 1916 written by W.B. Yeats in September of that year about the general uprising by which the Irish claimed emancipation from the British. At first sight, the poem could be read as celebrating the martyrs who gave their life for the cause of independence. Yet upon further scrutiny, it becomes clear that the attitude of the speaker is one of perplexity and doubt. The poem shifts uneasily between affirmation, question and negation. It is, fundamentally, at war with itself.

As such, the title is more a methodological tool than a theme per se. It enables the project to explore the force of paradox and contradiction, tension and ambivalence, and to address the state of urgency in the world and in the arts today. Articulated through a series of parcours or narratives, the exhibition intends to address the density of the present as well as the power of the imaginary, the visionary and the hallucinatory.

As writer Carlos Gamerro states in his essay for the catalogue, “Yeats stood in the First World, and in the Third, in the centre and the periphery, he looked at the present from the past, and vice versa, and at the future from both. He stood high up in the mountain, looking down upon the Earth in flames; and also at the bottom of society, with the fools and the mad, as in his Crazy Jane poems. Living, he looked on death, but also tried to look at life from death, addressing the passer-by who stopped at his tomb: “Cast a cold eye / On life, on death. / Horseman, pass by!” (“Under Ben Bulben”). Again and again he strove in vain to achieve God's perspective on human efforts and failures, a gaze under which all contradictions are resolved and all suffering is explained, and as many times he stepped down off this illusory perch in despair or disgust, only to try to climb again.”

The 11th Biennale de Lyon will comprise around 60 artists in the 150.000 square feet across four venues: La Sucrière, the Fondation Bullukian, the Musée d’Art Contemporain de Lyon, and the T.A.S.E factory. Its catalogue will be published by Les Presses du Réel.

The creation of the 11th Biennale de Lyon stems from the following sets of convictions:

1. Imagination is the primary medium of knowledge.
2. Imagination allows for the rational and the irrational to coexist productively.
3. Imagination is the primary force for emancipation.
4. A Terrible Beauty Is Born, a verse from the poem Easter, 1916 by William Butler Yeats that gives the title to this Biennale, brings together two apparent opposites. We are interested in this structure of productive contradiction.
5. This Biennale intends to address a state of confusion in the arts today, where art is conceived primarily as a commodity in the economic market.
6. This exhibition does not chronicle; it distinguishes between art and journalism.
7. It also distinguishes between art and communication. We resist the notion of the need to explain dense materials. If texts are to appear in the Biennale, or the catalogue, they will be artworks in themselves, not external explanatory texts.
8. With W.J.T. Mitchell, we ask what the images and works in this exhibition want and do. We intend to signal the power of the image, one that may drastically alter an established order.
9. We are not interested in the representation of the political, nor do we intend to enact the political. Such desires would be redundant.
10. The 11th Biennale de Lyon is being conceived from Buenos Aires, in South America, for and with Lyon. The artists in the exhibition have been selected as individuals and not as representatives of their countries of origin or regions.
11. The 11th Biennale de Lyon has the ambition to be alive. If it could be considered an animal or a beast, it would choose to be so. If it can be at war with itself, it will attempt to do so.

The 11th Biennale de Lyon will include around 70 artists from around the globe, primarily from Europe, Africa and Latin America.

The Biennale's catalogue is conceived as an editorial, autonomous work—rather than as a representation of the Biennale per se.
(Victoria Noorthoorn)

Opening hours:
Tuesday to Friday, 11am to 6pm
Saturday and Sunday, 11am to 7pm
Closed Mondays
Special extended opening during Lyon’s Festival of Lights:
Thursday 8 and Friday 9 December, 10am to 6pm
Saturday 10 and Sunday 11 December, 10am to 7pm
Special late opening on first Friday of every month, 6pm to 9pm
7 October, 4 November and 2 December 2011