A site and context-specific festival, designed especially into the cultural space of Tartu. The Tartu Art Museum features selected works by Marina Abramovic; at the Tartu Art House the exhibition project 'Acts of Refusal. Fleeing, Dreaming, Repeating, Watching (among others)' departed from Italian philosopher Paolo Virno's idea; Y Gallery features the group show 'Leaving Tartu' and at Noorus Gallery conversations and a seminar focus on relations between artists and curators. 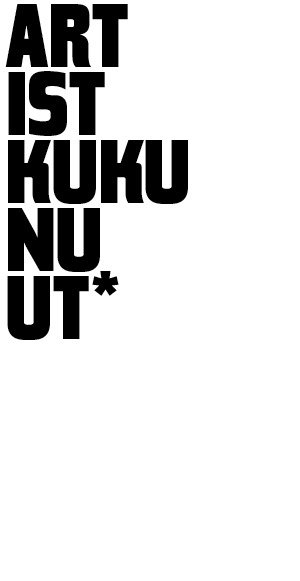 Do you remember us announcing ART IST KUKU NU UT for the first time internationally last September? Still never heard about the festival and the city of Tartu, Estonia? Well, ART IST KUKU NU UT itself is an unforgettable name, exhibited artists and our team love your attention and we are going to make an effort to deserve it.

We are delighted to announce the opening dates of ART IST KUKU NU UT 2011 and reveal our intentions behind this year's edition. As the team of organizers, we have decided not to 'lock' the festival under one title or defined topic – instead, we are interested in keeping the program open for interpretations and in generating new associations between the shows, artists and artworks. The point of departure for the festival is the selection of works by a classical figure of contemporary art, according to that guest curators, collaborators, and artists are invited to cooperate and participate.

ART IST KUKU NU UT is a site- and context-specific festival, designed especially into the cultural space of Tartu, a historical university city of the 100 000 inhabitants on the Eastern border of EU. As organizers, we wish to introduce the cream of contemporary art to the local community as well as the national audiences, also to integrate local artists into international networks and to draw attention to local emerging artists. Wish us luck!

Contemporary Art Festival ART IST KUKU NU UT has set as one of its aims the introduction of so called 'contemporary art classics', which is often daily accessible for art audiences in big metropolises, but rarely shown outside of mega-cities, and almost never in the former 'Second World', in Tartu, Estonia and in the Baltics in general.
In 2011, we are very happy to present carefully selected works by Marina Abramović in the ground floor of Tartu Art Museum. Her rich artistic practice – both in qualitative and quantitative terms – provides us a fantastic opportunity to discuss a wide range of issues like the function of art and the role of an artist in contemporary society; community's expectations for and preconception against art; specificities of practicing, documenting and presenting performance art; the body of a female artist and woman in general; student environment as a space for experimentation; Socialist past and post-Socialist present, among others.
The show is produced in collaboration with Tartu Art Museum and with the great support of Sean Kelly Gallery, New York.

The exhibition project 'Acts of Refusal' departs from Italian philosopher Paolo Virno's idea that the act of fleeing is an actual possibility for changing a condition that has become unbearable. What other forms of refusal exist which, instead of deciding on one alternative or another, undermine, mock, stretch realities to absurdity and thus produce – possibly – change? In a highly functional and affirmative society we want to search for such 'soft' acts of refusal in works of art that sidestep, or avoid partaking in a game that is not considered their own.

Especially in the countries of the Post Soviet Block and Socialist/Communist states, which were overtaken by the sudden (broadly and happily welcomed) invasion of Capitalism, but also elsewhere in the Western world, the end of state socialism in Europe in the late 80s and early 90s marked a fundamental shift in the orientation of the nation states and their social setup. How to adapt to the new values, the new order, or alternatively how to avoid adapting? The project 'Acts of Refusal' presents existing and partly commissioned new work by artists whose pieces aim to transversally cut through prevailing conditions, offering possibilities of evading and sidestepping instead of fighting directly.

The artists announce: 'We promise the audience will leave Tartu, but instead close them in a downtown cellar. It seems that leaving Tartu is not that simple after all. A small art world, a small country where reaching out is an act with its independent value that we have to practise. We are devoted to reach out, but in spite of our efforts we are closed in a cellar. We are longingly watching others through the window while standing in the queue and waiting for the permission to leave.'

The team of organizers wants to put a strong emphasis on communication and exchange among the young art scenes in the Baltic Sea region and to use the opportunity of the festival opening to discuss the issues crucial for us and our audiences. This year, conversations and a seminar will focus on relations between artists and curators, an evergreen situation that every art professional encounters. Events are organized by Ytter group (Bergen) in collaboration with ART IST KUKU NU UT team.
List of participating guests will be announced in September 2011.