A Sketch for a Public Space - a Special Project of the 4th Moscow Biennial of Contemporary Art. In this project the curators test the hypothesis of a new public platform for contemporary art at the very center of the city and at theheart of its contradictions: a school, a club, a space for discussion, and an exhibition that will unfold not only in space but also in time. 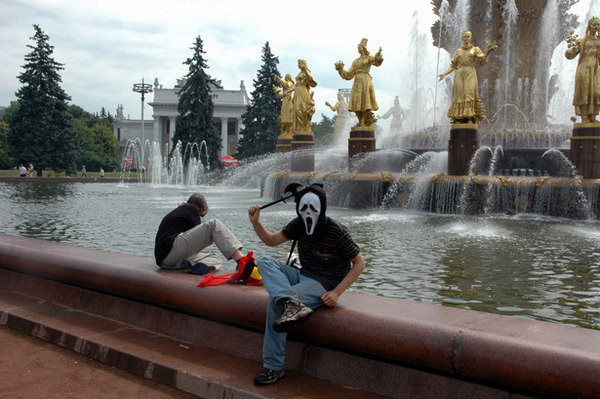 With 14 million inhabitants and 101 billionaires, Moscow is Europe’s biggest city, and perhaps its most contradictory. The former center of the socialist world once again goes global, with financial and cultural involvement in all the world’s other capitals, and with massive migration of cheap labor from Central Asia. But at the same time, Moscow isolates itself from the world to which it belongs, constantly in danger of becoming a provincial megalopolis. The lack of a real public sphere - both in literal, spatial and figurative senses - is part of the problem. The vast open spaces left behind by communism almost never become places for people. More and more people realize that there can be no civil society on the basis of movie theaters, shopping malls, condominiums and fancy cafes alone. It is the same in contemporary art, where so many new institutions turn the promise a new public sphere into more of the same passive-aggressive consumption. The city’s messages remain intense, though most of the answers it holds virtual, either online or hybernating in the urban fabric that surrounds us.

In the project “Auditorium Moscow,” the curators will test the hypothesis of a new public platform for contemporary art at the very center of the city and at the heart of its contradictions. It projects a school, a club, a space for discussion, and an exhibition that will unfold not only in space but also in time. Over the course of four weeks, “Auditorium Moscow” will offer workshops, screenings, and roundtables with artists and theoreticians from Poland, Germany, Israel, the Netherlands, and Latin America, examining the question of public spaces and the constituencies that inhabit them, in both urbanism and art. The workshops will be for a special group of students, most of them from Moscow’s two emerging art schools, the Moscow Rodchenko School for Photography and Multimedia, and the Institute for Problem of Contemporary Art (IPSI). The project’s main discussion space will feature a specially designed auditorium by Slovenian-born artist Tobias Putrih with a regular program of screenings and events.

“Auditorium Moscow” is the first project at the historical location of the Belie Palaty, a 17th century townhouse whose gates have remained closed for the last 20 years and will now be opened to the public. The venue is at the very beginning of the city’s so-called Golden Mile, where a fundamental gentrification has altered the dense urban fabric. A monument to Friedrich Engels sadly peers over to the reconstruction of Christ the Savior Church, in place of the unrealized Palace of the Soviets. At the same time, this place has a special meaning because it is where the human rights lawyer Stanislav Markelov and the journalist Anastasia Baburova were assassinated on January 19th 2009. The curators will preserve the improvised memorial on the building’s steps in solidarity.

The project Auditorium Moscow was initiated by the Museum of Modern Art in Warsaw in cooperation with curators Ekaterina Degot and David Riff. Established in 2005, the Museum is currently under construction, and located at a temporary premises. Its current program is very much defined by the social changes in former Eastern Europe, and its main focus is on the initiation of public debate. Auditorium Moscow reflects the museum’s interest in sharing knowledge on the notion of public space and understanding how it is reformulated in other societies under transformation.

Thanks to:
Nikolay Pereslegin, adviser to the Head of Moscow's Cultural Heritage Department
Pawel Potoroczyn, director of Adam Mickiewicz Institute

Organized by
the Museum of Modern Art in Warsaw
The project is realized as part of the International Cultural Programme of the Polish EU Presidency coordinated by the Adam Mickiewicz Institute. The project is cofinanced by the Ministry of Culture and National Heritage of the Republic of Poland.