'Photographs since 1982' by Judith Joy Ross encounters individuals with great openness and respect, seeking them out in everyday situations far from ideals of beauty and media cliches. Cuny Janssen's works in 'Portraits and Landscapes' are sensitively devoted to each individual personality. Eventually Jean-Paul Deridder with 'Stadt der Kinder' shows us a group of works produced at a derelict lot in Berlin-Mitte that was temporarily used as an adventure playground for children. 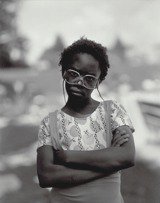 An exhibition by Die Photographische Sammlung/SK Stiftung Kultur, Cologne, in collaboration with the artist.

The American photographer Judith Joy Ross (*1946) shows us psychologically sensitive portraits of people that demonstrate individuality as well as a broad spectrum of emotional states and physiognomies: portraits taken of children during recreation or at school, adolescents about to enter adulthood, people involved in political issues, the Vietnam War or current military conflicts, men and women at work, serving as volunteers, or in their role as parents. She encounters individuals with great openness and respect, seeking them out in everyday situations far from ideals of beauty and media clichés. To her, the municipal park, the playground, the supermarket, the neighborhood streets, or the polling station are welcome sites for her photographs. Then it is the specific presence, the moment of making contact, that fascinate Judith Joy Ross and in which she takes pleasure. The camera affects her own perception like a clarifying filter: when she was once asked about the recipe for her photographs, she replied that she sees herself less as the author of the images and more as someone who communicates a situation that was experienced collectively. The artist prefers to pursue her work in series developed over the long term that address different groups of people and social backgrounds.

The photographer uses a large-format camera and a tripod. Awkward to handle, it requires concentration and patience, yet it results in consciously balanced and delicately defined photographs of great materiality. Judith Joy Ross prepares them as contact sheets of 8-x-10-inch negatives on printing-out paper with gold toning, and they exhibit highly differentiated shades of gray. In doing so, the artist takes up a method from the early days of photography, transports it into the present, and emphatically confronts us with the magic of a medium that records reality.

Judith Joy Ross began studying at the Moore College of Art in Philadelphia in 1966 and transferred in 1968 to the Institute of Design at the Illinois Institute of Technology in Chicago, where she also attended classes taught by Aaron Siskind and Arthur Siegel. Yet independent of her period of training, she sees her work as an artist beginning with the series Eurana Park, Weatherly, Pennsylvania, in 1982. It was in particular children and adolescents who attracted her attention. The vulnerability of the children, their uninhibitedness, and their feeling of security among their circle of friends become evident in this series, as does the difficult period of transition into adulthood. In this series the photographer already begins to address aspects that she would again take up later and vary.

An important series that directly succeeded Eurana Park is Portraits at the Vietnam Veterans Memorial, taken in 1983 and 1984 in Washington, D.C. On the grounds of the newly erected memorial to fallen and missing soldiers, Judith Joy Ross used her camera to pursue what for her was the most central question of all: “How do people deal with sorrow and pain?” What resulted are photographs that show very different reactions; the facial expressions of the visitors to the memorial alternate between irritation, insight, and deep consternation.

When asked in an interview why she prefers to treat portraits of children in relation to landscape photographs in her projects, Dutch photographer Cuny Janssen (*1975) replied: “Nature and children direct to the future, that is what connects them in my opinion.” The series she has compiled since 2002 were produced in countries and regions as diverse as Macedonia (2003), Iran (2004), Prince Albert, South Africa (2005), Amami, Japan (2007 and 2008), or Oklahoma, USA (2010). During her sojourns lasting several weeks, Cuny Janssen stays with the families whose members appear in her pictures. In their homes she is close to their day-to-day lives and can experience the special atmosphere of the places.

While her first book, India (2002), features only photographs of children in individual and group portraits, in her second publication, Portrait/Landscape, Macedonia, Cuny Janssen combines the genres of portrait and landscape. She wanted to take portraits of children in Macedonia, an independent state in the Balkans, who have to struggle with the trauma of war early in their lives. In a dialogue with the landscape photographs, which present a nearly virgin, wooded mountain region with fields, pastures, and lakes, she opens up a universal dimension with existential questions about historical and natural influences on people.

In the publication Finding Thoughts, 2005, Cuny Janssen continues her inquiry by combining portraits and landscapes from several countries. Geared to the respective project, like all of the other publications this book has a very individual character and is to be regarded as an independent object.

The objective, concentrated portrait photographs by Cuny Janssen, which also include youths and adults, are sensitively devoted to each individual personality. They are never dominated by a direct request to reveal too much about oneself, one’s own feelings, experiences, and moods. Yet if someone does open him- or herself up, this speaks for the trust that Cuny Janssen has responsibly built up over time. Her pictures of landscapes and nature bring us closer to the specific features of each location and at the same time draw our attention to the fundamental factors of timeless validity that influence human life.

The exhibition, which was organized in collaboration with the artist, will present a selection from nearly all of the series mentioned above. Some of the works stem from the holdings of the Photographische Sammlung/SK Stiftung Kultur, Cologne.

The group of works by the Belgian photographer Jean-Paul Deridder was produced between 1998 and 2010 at a derelict lot in Berlin-Mitte that was temporarily used as an adventure playground for children. The children could freely build huts, jungle gyms, or other constructions according to their own wishes and ideas using materials such as boards and tarps, often made available by adjacent construction sites. They produced countless imaginative sculptural structures with their own, occasionally anarchic aesthetic. While they may appear to be provisional and fragile, they radiate temperament and creativity.

Jean-Paul Deridder visited the site on numerous occasions, each time discovering things that had been added, existing constructions arranged in new constellations, or noticing that other things had been destroyed. Deridder’s black-and-white photographs take up this aspect of change in different ways. He looks at numerous details, such as an elephant sawn out of a slab of wood—perhaps a piece of scenery left over from a children’s theater—or a wooden wall with children’s drawings and handwriting that is partially covered by a plant in the foreground. The photographer took another picture of this motif in which one sees the wooden wall without drawings and in a somewhat different format. It is not readily apparent how much time passed between the two images.

In order to visualize as many facets as possible of his object, Jean-Paul Deridder selected a variety of perspectives—he approaches, backs away from, walks around his motifs as well as the playground. Thus, beyond individual formations the photographer repeatedly shows views of entire ensembles of shacks, wooden walls, and connecting paths that enable the viewer to take an imaginary walk over the terrain with its individual trees and bushes. One is occasionally reminded of a labyrinth of odd, confusing structures without a specific function. What aids orientation is the graffiti, which could be an encrypted comment, on the wall of one of the adjacent buildings. In some of the photographs, structures from the city surrounding the playground, such as the façades of apartment buildings, or parked cars emerge from the background, giving the Stadt der Kinder a location. The adventure playground, one of whose characteristics is the element of constant change, constitutes a microcosm in big-city life in Berlin, a place that is also undergoing a vital change and as a macrocosm provides a meaningful pendant to the playground.

Jean-Paul Deridder (*1963) studied from 1984–88 at the Ecole des Recherches Graphiques in Brussels. From 1990 to 1993 he received funding from the Stichting Ateliers ’63 in Haarlem, and in 2002 he was awarded a grant from the State of North Rhine-Westphalia. Jean-Paul Deridder lives and works in Brussels. His work is represented by the Galerie Thomas Zander, Cologne. Solo exhibitions have taken place at the FotoMuseum Provincie Antwerpen (2000, 2007), at the Filmmuseum Düsseldorf (2003), and at the Galerie Micheline Szwajcer, Antwerp (1992, 1995). The first presentation of the project Stadt der Kinder took place in 2001 at Nagel-Photo-Planke, Galerie am Scheunenviertel, Berlin. A catalogue documenting the project, Stadt der Kinder, Berlin: City of Transience, with texts by Michael Hirsch was published in 2008 by Hatje Cantz.

Jean-Paul Deridder will be conducting a guided tour through the exhibition Stadt der Kinder on Thursday, October 13, 2001, at 7:00 p.m.