For the first time in the history of Portikus, the works of two artists will be presented as fully self-contained and spatially separate. Yet the architectural separation is meant to indicate analogy rather than disassociation: Michael Pfrommer's and Adrian Williams's oeuvres have developed in parallel ways for years and are in many regards akin to each other. Their artistic practices are in continuous exchange with each other; they have also developed numerous joint projects. 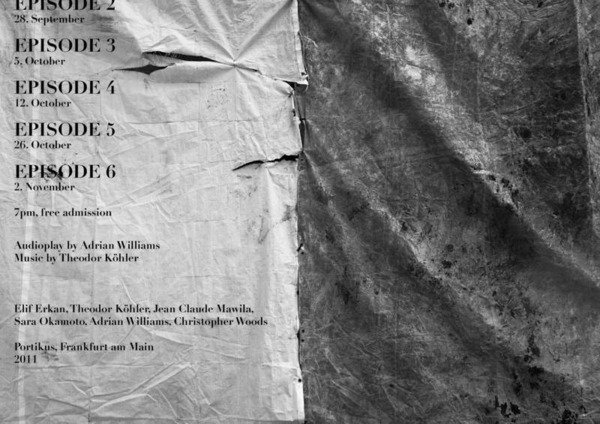 As a further engagement with its architectural redesign—a recent addition of an intermediate second floor that has doubled the exhibition space—this show at the Portikus confronts two artistic positions. For the first time in the history of Portikus, the works of two artists will be presented as fully self-contained and spatially separate. Yet the architectural separation is meant to indicate analogy rather than disassociation: Michael Pfrommer’s and Adrian Williams’s oeuvres have developed in parallel ways for years and are in many regards akin to each other. After graduating from the Städelschule, they spent time abroad—in Tokyo, New York, and Tierra del Fuego—before returning to Frankfurt in 2009, where they now live and work. Their artistic practices are in continuous exchange with each other; they have also developed numerous joint projects.

Michael Pfrommer’s paintings and drawings speak of mystical universes. His motifs grow out of everyday impressions from his immediate surroundings as well as from his friends and family. He recalls fragments from films, pieces of music, song lyrics, and picture stories, knitting them together in forever new ways in order to capture moments that strike him as significant. The results vary, from disfigured self-portraits and bizarre comic strip characters to bleak or lifeless landscapes and subtly delineated still lifes. Pfrommer’s pictures reveal his fascination with painters such as Bernard Buffet, James Ensor, and Francisco de Goya, whose somber and often macabre pictures are profoundly unsettling depictions of human and psychological states. Pfrommer’s particular talent is to face the frequently abysmal conditions he sees—be they social or personal—with great subtlety and a grain of humor. His schematic approach underlines this further: he paints in a compulsive fashion, always using the same paper size, constantly repeating and reworking motifs or taking them up again after some time. The result is a hermeneutic oeuvre in which certain impressions, places, objects, and people return time and again. Repetition, coupled with restless insistence, is a central feature of Pfrommer’s work. The exhibition presents his work in unprecedented breadth in order to highlight its complexity.

Adrian Williams’s new work occupies the temporary upper floor at Portikus. Both the acoustic conditions and the intimate room with the stairhead, the wooden flooring, and the views of the city provide an ideal setting for Adrian Williams’s carefully planned performances. Her scripts are transformed into audio plays through the collaboration with the composer Theodor Köhler, and consist of interlinked musical and narrative strands; with each new listening, they give rise to different narrative images. Since her work moves between the fields of installation and performance art and theater, the artist often chooses to perform a piece for a limited period of time, as though as a stage performance. In the exhibition at the Portikus, the piece, which is subdivided into several chapters, will be subject to ongoing elaboration over the entire duration of the exhibition; the artist will work with the participating musicians and actors and perform once every week. During the opening hours, the instruments, sound objects, microphones, speakers, pieces of furniture, etc. that Adrian Williams has assembled into a stage design like installation will serve the artist and her team as a public rehearsal space. The entire intermediate ceiling is thus transformed into a voluminous sounding body transmitting voices and sounds to the lower exhibition space.

Although Adrian Williams’s work may at first glance seem to be the formal opposite of Michael Pfrommer’s paintings, there are several parallels: here, too, observations from wondrous universes appear; fantastic and mysterious stories, enigmatic encounters, and strange moods. Like Pfrommer, she sketches the contours of characters everyone can read in their own way. And Williams, too, relies on repetition and doubling, of selected sounds or words, for instance, which persistently reappear throughout a piece to transport the listener back to a particular place. The “divided proximity” between the two oeuvres enabled by the spatial configuration at Portikus helps to highlight each artist’s unaffected engagement with the other’s work, but also the ways they directly influence certain processes and artistic decisions.

The exhibition of Michael Pfrommer’s and Adrian Williams’s work is one in a series of exhibitions entitled MainWerk – a cooperation between Stiftung Polytechnische Gesellschaft, Frankfurt am Main, the Städelschule, and the Portikus. Once every year, the exhibition series seeks to show an exhibition created especially for Portikus by a former Städelschule student who has successfully pursued a career as an artist after graduation and is being exhibited on the national or international stage. By showing his or her work at the Portikus, the series seeks to present the artist in Frankfurt and give his or her work local visibility. With this exhibition series, Stiftung Polytechnische Gesellschaft, Frankfurt am Main, seeks to draw attention to Frankfurt’s contribution to contemporary art and to support young artists from Frankfurt.

Stiftung Polytechnische Gesellschaft, Frankfurt am Main, was founded in 2005. Its philanthropic work is concentrated in three main areas: education, science, and technology; arts and culture, including preservation of the city’s cultural heritage; and social, charitable, and humanitarian work. It seeks to contribute to Frankfurt’s development as a model modern and citizen-centered urban society.

A catalogue will be published in conjunction with the exhibition. An artist’s edition by Michael Pfrommer will also be available.

For more information and for guided tours of the exhibition, please contact info@portikus.de or call 069-9624454-0.