Art2 refers to the use of a specific work of art in the visual language of an original work of art. Jane Hammond's Fallen is a monumental ongoing installation consisting of over 4.000 unique handmade leaves each inscribed with the name of a American soldier killed in the war in Iraq. 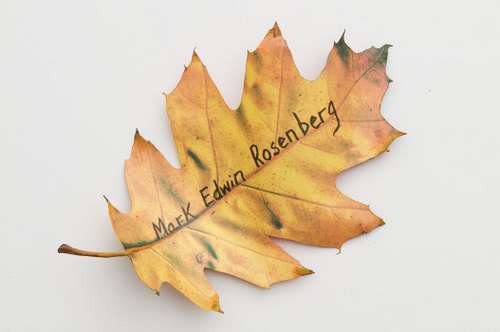 The FLAG Art Foundation is pleased to announce two exhibitions: Art², a group exhibition on the 9th floor, and Jane Hammond: Fallen, a monumental ongoing installation consisting of over 4,000 unique handmade leaves each inscribed with the name of a American soldier killed in the war in Iraq, on the 10th floor. The two exhibitions will be on view from September 23 through December 17, 2011.

The FLAG Art Foundation is honored to present Jane Hammond’s Fallen, a monumental ongoing sculpture that the artist has worked on continuously for seven years. This haunting memorial consists of a low rectangular platform layered with a vast multitude of brilliant fall leaves. Each leaf is unique, handmade by the artist, and inscribed by her with the name of a U.S. soldier killed in Iraq. This exhibition at the FLAG Art Foundation begins with 4455 leaves. As a memorial, Hammond’s Fallen is unusual in that it emphasizes the singularity of each individual by making his or her leaf unique. The light and delicate materials subvert the traditional expectations of enduring materials such as bronze and stone in favor of an expression of the fragility and ephemerality of life.

The artist has said: “There is something about leaves in the autumn, at the zenith of their coloration that is transcendent: they are both dematerializing and intensifying simultaneously. As their bodies become lighter, their color is becoming more and more radiant. I’ve tried to gather leaves just at this moment when the chroma is so strong it transcends the body of the leaf and becomes a kind of pure light. It rhymes with the idea of the spirit but in a way that is accessible and earthly. It’s more Emerson than Aquinas.”

Born in Bridgeport, CT in 1950, Hammond received her BA from Mount Holyoke College in 1972 and her MFA from the University of Wisconsin-Madison in 1977. Her work can be found in over fifty major public collections including the Whitney Museum of American Art, the Museum of Modern Art, the Metropolitan Museum of Art, the Chicago Art Institute, the National Gallery of Art and the San Francisco Museum of Modern Art. Hammond currently lives and works in New York.

This Exhibition at The FLAG Art Foundation was organized by The Whitney Museum of American Art, New York.

The title of the exhibition, Art2, refers to the use of a specific work of art in the visual language of an original work of art. Whether a literal transcription or a point of departure, the featured artists quote from artists ranging from those of their own generation to those from decades, and even centuries before.

These works stand on their own while adding another layer of meaning to what may seem familiar at first glance, exploring the constant flux of art, in which artists reimagine and incorporate past works, to ultimately unlock ways in which our visual history informs our present. Barry X Ball’s sculpture, Purity, directly references Antonio Corradini’s titled, La Purità (c.1720- 25) yet adds and subtracts subtle details in composition and medium. Ball’s sculptural process involves a complex array of cutting edge technology and procedures, including 3-dimensional scanning, digital modeling, and computer-controlled milling as well as traditional modes such as, detailed hand carving and polishing.

In Wild Horses, Glenn Brown distorts Jean Baptiste-Greuze’s Innocence (c.1790), a portrait of a young woman with a cherub-like face, draped in a swath of fabric tenderly cradling a lamb in her arms. Brown transforms the seemingly romantic image of purity and youth into a representation of the bizarre and the grotesque; the woman’s eyes have no pupils and her flesh morphs into swirling brushstrokes of acid yellow, and the lamb is displayed as a vivid red with green eyes. By recontextualizing and mutating the original image, Brown imbues it with another reading, inviting the viewer to examine the medium, the subject and the notion of beauty. Awol Erizku’s, Girl with a Bamboo Earing, reimagines Vermeer's Girl with a Pearl Earring (c. 1665) within contemporary life. Erizku’s photograph depicts a female sitter in the same pose and attire as Vermeer’s subject, but replaces the recognizable Dutch female with an African-American female. That Erizku decides to replace and rewrite this iconic image emphasizes and draws critical attention to cultural and social constructs embedded in the complex art history canon.