A solo show of painting and sculpture by Robert Rauschenberg, arguably the first of his generation to chart a viable course out of Abstract Expressionism towards the formal integration of art and the mess of life: 'There is no poor subject. A pair of socks is no less suitable to make a painting than wood, nails, turpentine, oil, and fabric.' - Brazil: a group exhibition of Brazilian art from the late modern period, featuring works by Sergio Camargo, Lygia Clark, Amilcar de Castro, Helio Oiticica, Lygia Pape, and Mira Schendel. 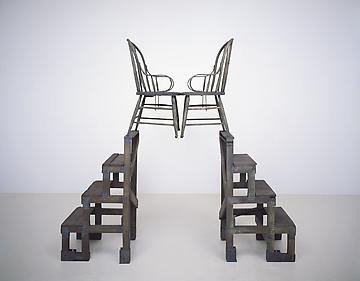 Gagosian Gallery Paris is pleased to present an exhibition of painting and sculpture by Robert Rauschenberg.

Rauschenberg stands as one of the most inventive artists in American art, arguably the first of his generation to chart a viable course out of Abstract Expressionism towards the formal integration of art and the mess of life. His approach to making art using discarded materials, everyday objects and appropriated images eviscerated the distinctions between medium and genre, abstraction and representation, while his “flatbed picture plane” created an enduring change in the relationship between artist, image, and viewer. From the outset, the incidental, the immediate, and the perception of a presence greater than his own artistic virtuosity drove Rauschenberg’s creative energies. By working in what he called “the gap between art and life” he developed an altogether new visual language based on collage as a microcosm of the unbounded world that rejected the conventions of unitary meaning advanced by high art.

In the early Elemental Sculptures, Rauschenberg stripped the medium to its fundaments, using fragments of found wood, brick, concrete and iron to create sculptures and pedestals possessing a quiet humility that belies their latent energy. His unending fascination with the incidental materials that he came across in the urban environment is evident in two floor-based works, Hue Cart (1982), a little tricycle wheel jauntily positioned between three candy-striped construction poles, or The Brutal Calming of the Waves by Moonlight (1981), a simple yet forceful consisting of a crushed metal drum from which a large piece of scrap metal thrusts out into space.

Throughout his life, Rauschenberg also experimented with new ways to construct a pictoral surface -- from dye transfer to silkscreen and chemical imprint -- producing potent accumulations of collaged images that address their reproducible nature while re-envisioning the relation of art to life. In his humorously titled Urban Bourbon series from the early 1990s, found images such as a baby buggy, rocky seashore or a Greek statue are printed directly onto metal supports, then brushstrokes of varnish and lacquer are applied to transform the reflective surfaces creating interplay between control and chaos in layered and veiled similitudes.

The exhibition, presented in collaboration with the Estate of Robert Rauschenberg will be accompanied by a fully illustrated catalogue.

We use the term "neo-concrete" to differentiate ourselves from those committed to non-figurative "geometric" art …and particularly the kind of concrete art that is influenced by a dangerously acute rationalism.
-- Ferreira Gullar

In the late 1950s, a group of young Brazilian artists reacted against the dogma of the Concrete Art movement of the 1930s that was predicated on non-representational geometric shapes, mathematical formulas, and grids. Breaking away from the grip of European artistic traditions, they sought to challenge and reinterpret pervading definitions of the modern.

The exhibition takes as its point of departure the NeoConcrete Manifesto written by Ferreira Gullar in 1959, which was based on the phenomenological philosophy of Maurice Merleau-Ponty. Artists working in Brazil in the 1960s and 70s embraced and developed the initial ideas put forward in the manifesto, exploring the production of meaning via the sensations produced by bodily engagement with art works.

Although still opposed to veritable representation, the so-called “NeoConcretists” advocated the use of abstracted corporeal forms, sensuality, subjectivity, and color. Intent on undermining the implicit separation of artwork and viewer, they sought to expand art’s formal, emphatic and social dimensions. NeoConcretists saw works of art as living organisms, and thus encouraged fabrication without the use of a frame or artificial support to bring art into real space and direct contact with viewers. Herein lies the radical nature of NeoConcrete art.

In the 1960s, Lygia Clark created a series of folding metal sculptures called Bichos (little animals) that were conceived to be handled and manipulated by the viewer. Here the object of art is the very process of the viewer’s doing. Amilcar de Castro’s untitled wooden sculpture, (1952) has sensual contours that recall the natural world. An un-mounted, moveable object, it can be interacted with and carried to different locations, as for Mira Schendel’s Caderno Selos (1971), a loosely bound book of milky acrylic squares to be rifled through and re-arranged at will.

Sergio Camargo’s Orèe (1964) and Untitled (1960) contain references to organic form in clustered wooden reliefs painted in monochrome white. The inherent dynamics of the piece shift according to the viewer’s vantage point, light and shadow. Lygia Pape’s Tteia, a gauze-like weave of fine golden filaments stretched taut between floor and ceiling, articulates the surrounding space with the play of light upon its immaterial planes, while the slightly irregular geometric forms of Helio Oiticica’s luminous gouache Metaesquema jostle with energy within the confines of the two-dimensional support.

Exhibition design is by Paris-based architect and designer India Mahdavi. A fully illustrated catalogue with an essay by Brazilian curator Paulo Venancio Filho will accompany the exhibition.