Game plan is made up of about one hundred works covering the whole of the artist's career from 1966 until his early death in 1994.The show tries to highlight Alighiero Boetti's ability to transform any raw material into a work of art, and the conceptual, visual and aesthetic complexity that is always present in this artist's work. Attention is also drawn to his interest in prioritizing collective work over personal protagonism. 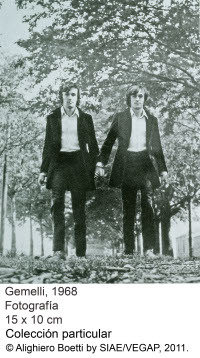 This is the largest retrospective to date on Alighiero Boetti (Turin, 1940-Rome, 1994), and the first to be held in Spain.
The show is made up of about one hundred works covering the whole of the artist’s career from 1966 until his early death in 1994.
After a long period of study and documentation, the curators, with the full support of the Archivio and Fondazione Alighiero Boetti, have made a careful selection that is specifically intended to show the artist as one of the most fascinating and influential figures of the second half of the 20th century.

The exhibition will bring together some of the key works of the artist’s professional career. On loan from numerous international collections, some of these pieces are being shown to the public for the first time.
Special attention is merited by a selection from the Mappa series (1971- 1994), the most popular of the artist’s creations. This is a set of large-format world maps in the form of embroidered tapestries produced in collaboration with craftsmen in Afghanistan and Pakistan.
Also on display is Lampada Annuale (1966), a light bulb in a wooden box that lights up randomly for only 11 seconds each year, and is among the most representative works of his povera production.
Other pieces included in the exhibition are Ordine e Disordine (1973), a series of tapestries of colored letters that were handed over by the artist to Afghan and Pakistani embroiderers for them to choose the final composition, and some of the lavori biro, works done in ball-point pen in the company of friends and acquaintances.

The show tries to highlight Alighiero Boetti’s ability to transform any raw material into a work of art, and the conceptual, visual and aesthetic complexity that is always present in this artist’s work. Attention is also drawn to his interest in prioritizing collective work over personal protagonism.

Alighiero Boetti is usually labeled as a conceptual artist belonging to the povera movement. However, he distanced himself from the movement in the seventies, and was himself reluctant to admit classification, although he became an original model for a whole generation of contemporary Italian and international artists. He worked with a wide range of tools, techniques and materials, including paper, Plexiglas, plaster of Paris and agglomerate. He regarded them not merely as media but as ends in themselves, appreciating and exploiting their intrinsic characteristics. The artist’s work was influenced by his profound theoretical interest in philosophy, alchemy and esotericism, and also by his travels.

The exhibition will be completed with the production of a catalogue in English and Spanish. Published by the three institutions involved in the project, it will contain more than 140 illustrations together with essays by the curators, Lynne Cook, Mark Godfrey and Christian Rattemeyer, and texts by other authors like Claire Gilman and Jason Smith.