Muntadas. Between the Frames

The Forum (Barcelona), 1983-1993 (2011). The work is part of Muntadas's multiple installations that dissect the complex mechanisms of art, politics and economics. According to the author, this exhibition presents 'a vision of the art system in the eighties', although the configuration of the work continued until the beginning of the year 2000, through the artist's constant re-elaborations and modifications of the presentation device of the installation. 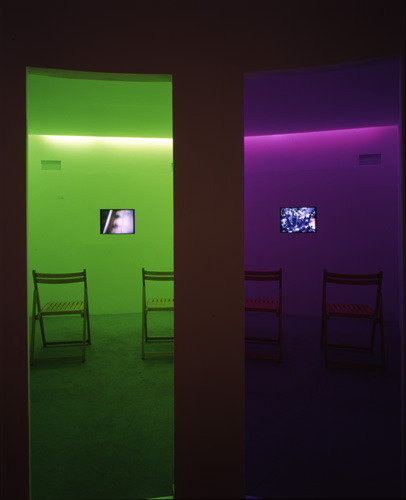 From the MACBA Collection, the Museum presents Between the Frames: The Forum, an ambitious ten-year project featuring the voices of 156 cultural stakeholders, an installation acquired by the MACBA Foundation in 2010.

A different version of the work, which was originally conceived as a panopticon with seven cells, will be on show this autumn at the Long Beach Museum of Art in California, where Muntadas first began his project in 1983.

'Art, as part of our time, culture and society, shares and is affected by rules, structures and tics like other economic, political and social systems in our environment.' So began the interviews given by Antoni Muntadas between 1983 and 1991 to one hundred and sixty agents from the international art circuit, and compiled in the installation Between the Frames: The Forum (Barcelona), 1983-1993 (2011). The origins of the work are to be found in the exhibition Comments at the Long Beach Museum of Art, 1983, in which the artist took part, and where the explanations of his piece La Televisión, 1983, given by the museum guides, prompted him to initiate this new project. The work is part of Muntadas's multiple installations that dissect the complex mechanisms of art, politics and economics.

According to the author, Between the Frames: The Forum (Barcelona), 1983–1993 (2011) presents 'a vision of the art system in the eighties', although the configuration of the work continued until the beginning of the year 2000, through the artist's constant re-elaborations and modifications of the presentation device of the installation. The work includes eight 'chapters' of different durations (between 15 and 45 minutes), amounting to a total of 260 minutes of screening, edited by Muntadas from two hundred hours of interviews conducted by him with dealers, gallery owners, collectors, museum directors, guides, critics and media specialists. The last chapter serves as an 'epilogue' in which Muntadas gathers together the opinions of several artists regarding the art system. The interviewees – professionals representing the various levels of mediation between the work of art and the public – talk about their values, functions, responsibilities and points of view. Even though every interviewee was asked the same questions, the flow of responses expresses a significant variety of often-conflicting opinions.

Muntadas presents these videos with a radial exhibiting device: a circular modular structure with a central space (a physical space for discussions, hence the term Forum in the title), marking the convergence of seven cellular spaces with a monitor each, where the various chapters are projected simultaneously. Each space (lit in a different colour) is dedicated to a particular type of art professional. Each section functions independently, but also as an integral part of the series that converges into the central space, a meeting place where contrasting opinions are expressed and where the spectator can wander, reorder and interpret what is being seen and heard. The installation's radial structure evokes an inverted Panoptic, the architecture of the modern penitentiary system, which, according to Michel Foucault, characterises disciplinarian modern societies. Muntadas puts the spectator in the place of the invigilator, so that he becomes a supervisor of the art system. In this way, the public is asked to be vigilant.

In the videos projected in the different spaces of the installation, Between the Frames: The Forum (Barcelona), 1983–1993 (2011) avoids the classic visual format for interviews. Instead of showing the interviewee (who appears only at the beginning), the recorded answers are accompanied by images that function as a visual metaphor of the role of the interviewee in the art system. Thus, a day at the Tokyo Stock Exchange for the collectors, the comings and goings of waves for the critics, and a train for dealers and gallery owners. These images, qualified as 'open visuals' by the artist, are a visual resort that helps to reinforce the project's intention. However, although generic names such as 'critics' or 'collectors' are used and their specific roles expressed, the interviewees offer a totally heterogeneous perception of their role. The images reinforce this plurality: Muntadas associates each group of professionals with a visual theme, but the images come from multiple camera perspectives: a way of indicating that what matters are not the people speaking or their positions of authority, but the values and opinions they bring to the fore. This allows Muntadas to avoid the art world's tendency towards mystification. Furthermore, all the interviews are presented in their original language: English, Spanish, Catalan, Italian, French and Portuguese.

The installation's modular structure is adapted to the architectural constitution and the different needs of every space. Although the original version of the work was circular, in 1994, at the Musée d'art contemporain, Bordeaux, the monitors were distributed in different parts of the museum. Lately, Muntadas has invited various professionals from the art world and other cultural fields to construct the presentation device, in accordance with the music model where every musician plays his own score. Since MACBA acquired the work in 2010, Muntadas has recovered the original circular structure, which is shown next to the testimonials of the successive installations and actualisations of the work.

Coinciding with the presentation of Between the Frames:The Forum (Barcelona), 1983–1993 (2011) at MACBA, visitors will find, on the ground floor of the MACBA Study Center, the original interviews that served as raw material for the videos in the installation. The recordings were acquired by the Library in 2009, when the artist and MACBA agreed on the digitalisation of the material, since it constitutes a valuable document for anyone interested in the art world's protagonists during the eighties. Far from limiting or closing the work, this double acquisition offers new readings and interpretations of the project, given its long duration and constant reformulation.

Between the Frames: The Forum (Barcelona), 1983–1993 (2011) questions the numerous contemporary instances that can grant authority to an artwork. The installation reflects the interests of the artists during the eighties (a decade of growth and expansion in the art world) in relation to the art circuit, its institutional practices, and its values and conventions. 'The artist questions who is in control, who benefits, what are the hidden agendas and how power flows in a mediated world.' (Gale, Peggy: 'Muntadas: Searching Between the Frames', Parachute, no. 70, 1993, p. 8)

'The analytical format of Between the Frames pushes us to ask a further question: What mythologies govern Muntadas's own conception of art and the art world? The work sets up an implicit contrast between the blinkered selfconception of the mainstream '80s art world and the critical analysis presented by Muntadas's alter egos in the Epilogue. (…) By foregrounding the elements of the art world which usually serve as its invisible background, Between the Frames asks us to rethink our own unexamined convictions.' (Heartney, Eleanor: 'Reframing the Eighties', Art in America, vol. 82, no. 11, November 1994)

'Muntadas's tour de force consists in criticising without making judgements, while stating that an object can be more artistic by the fact that it is deliberately polysemous. In the art world, as shown and told by the artist, the only thing missing is precisely his own work. And its absence is such that it provokes an artistic vision comparable only to that of the great works of art.' (Gauville, Hervé: 'Muntadas, le monde congédié par l'écran', Libération, 24 May 1994)

To mark this presentation, MACBA will produce two publications:
Muntadas. Between the Frames (the transcriptions). Barcelona: MACBA, 2011. Three editions: Catalan, Spanish and English. Full transcripts of all the statements by project participants. Available from September 28.
Between the Frames: The Forum. Collecció de la Collecció series. Texts by Anne Bénichou and Muntadas. Barcelona: MACBA, 2011. Two editions: Catalan/Spanish, and English. A book devoted to the project, including an interview with Muntadas. Available towards the end of the year.

Now, the interviews of Between the Frames: The Forum, can be seen in their totality for the first time at the MACBA Study Center.

The Museu d'Art Contemporani de Barcelona Foundation, thanks to the generous support of the Repsol Foundation.