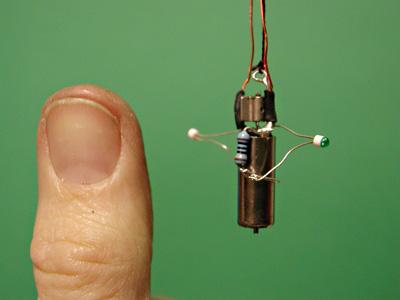 Paul Granjon works in a variety of media including installation and sculpture in which pastoral and landscape themes are prevalent. This often involves the creation of synthetic animals and natural environments such as forest glades. Rather than producing visually seamless recreations of living forms Granjon is interested in their approximation. In 'Automated Forest', 2003, miniature bird's sing among the branches of a tree controlled by a computer programme (random algorithm). This introduces an element of artifice to his work that lies in direct opposition to its natural origins, which he describes as a "playful comment about the effects of exposure to an exponentially growing and more capable technological environment, feeding the work with my equal feelings of attraction and concern".

With subject matter including motorway flyovers, woodlands and wild animals Paul Housley produces paintings that pay homage to the everyday world. Painted in a matter of fact manner his works appear at first conventional; free of an overtly laboured technique and revelling in a hedonistic painterlyness. Landscape (be it urban or pastoral) is a recurring theme, rendered in a style that is both generic and highly personal yet always profoundly endearing. 'Backpacker', 2002 is a new version of a work from 2000, which depicts a rucksack-laden traveller seen from behind. With its economical brushwork and palette of colours the image appears iconic. The familiar wanderer sporting a uniform with a metaphorical significance recognised by all.

Rut Blees Luxemburg uses photography to document the urban landscape. Working predominately at night and using long exposures she utilises the synthetic light emitted by streetlights and buildings. Radiating a colour cast of greens, and reds through to sulphuric yellow, her photographs offer a physical as well as psychic depiction of our surroundings. 'Olymp' is a new work from Cauchemar, her series shot in Paris. Capturing a plume of smoke rising from a factory chimney the exposure-time of the film has rendered its form into a visceral mass. Shrouded in an aquatic green glow natural elements, trees and foliage, appear to enter into the picture plane as if floating in a stream. Capturing the intangible and transient by-product of industry 'Olymp' offers us a view of the powerful interaction between nature and man.

Joe Duggan produces images that appear at first sight to be snapshots of family life. Whether it is a busy domestic kitchen or a father and son walking in the park the photographs offer idyllic views of daily life. However on closer inspection the true nature of Duggan's work becomes apparent. The artist is adept at creating synthetic dioramas. Using backdrops, mannequins and props he sets the stage for imaginary events to occur, and in which he can interact. As a son to a young father or a pregnant wife to her husband the mannequins play out a reciprocal surrogate role, unifying and disrupting the false narrative. Duggan's images are poignant in their idealised imaging of various types of family's whilst highlighting darker social and political concerns.