The 5th edition of the Contemporary Dance and Performance Festival will encompasses diverse expressions of contemporary art, dance, theatre, music, performance art. The conceptual framework is determined as 'At Work'. 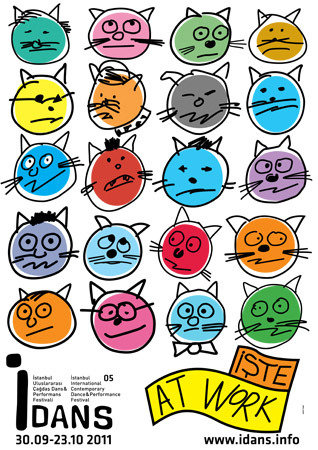 The 5th edition of the iDANS Festival will encompass diverse expressions of contemporary art, dance, theatre, music, performance art –emphasizing their commonalities in respect to performativity and corporeality– and will take place at multiple venues in Istanbul between 30th September-23rd October 2011. The event will continue in the next season in Berlin with a special international program entitled “biDANS: Guest Works in Berlin”.

Organized and presented by Bimeras Cultural Foundation each year around a curatorial theme, the conceptual framework of the 2011 edition of iDANS is determined as “At Work”. The program will feature discussions, staged performances, public space interventions and workshops as well as informal meetings in order to interrogate, to what extent each step in realizing a contemporary performing arts work can be considered as “work”; how the notion of “immaterial labour” as the predominant mode of production in current economies is reflected in the conception, implementation and organization of artistic processes; and how artistic labour contributes to and transforms creativity-centred economic and symbolic production.

In contemporary “creative capitalism”, we see the emergence of a new type of worker. Similar to a dancer, the “new worker” is expected to be endowed with mental mobility, agility, adaptability, flexibility, and playfulness and should continuously be engaged in the production, circulation, and distribution of images, ideas, affects, codes, sensations and gestures.

How does contemporary art work? What works? What kind of a “job” is art? Can we consider the new worker as an artist and the artist as a worker? Has the incitement to creativity become an instrument of exploitation in the contemporary organization of production in general? What are the potential roles that remain for creativity for the development of human agency and emancipation?

iDANS 05 brings together once more in Istanbul some of the most challanging artists from all over the world to address these questions.

In its previous edition in 2010, iDANS had hosted “Critical Endeavour”, an international educational program designed for the professionalization of contemporary performing arts journalists, writers and critics. This year, a local version of the workshop will take place within iDANS in order to deal with the questions, concerns, ethics and responsibilities of critical practices in contemporary arts and aims to contribute to the development of an informed, yet accessible, discourse on live arts.

From 2011 onwards, iDANS is going to hold a special section of the festival in a different world-city. The first stop is Berlin!

Under the rubric of the general curatorial theme and research of iDANS in 2011, Bimeras is going to launch a sub-section of the festival in Berlin for the special occasion of the 50th year of the “Guest Worker Pact” between Germany and Turkey. With its international artistic and discursive program, the festival is going to address the changing notions of work, creativity, “innovation” and productivity; issues pertaining to work-related mobility and immigration; transformed temporalities of production and the blurring of life and work through precarious labour relations that in turn introduce new forms of alienation and suffering on top of existing problems of integration and xenophobia. To what extent can a stranger be accommodated as a guest, and when and under what conditions does hospitality turn into hostility? To what extent is such a shift fuelled by changing modes of production that privilege symbolic and cultural capital and capacities on the part of “workers” instead of the old school definitions of and dependencies on “manual labour”?