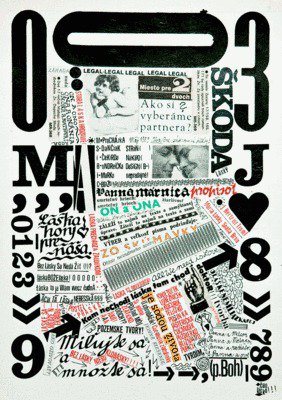 Cyril Blažo, Stano Dančiak and Boris Ondreička belong to the first generation of artists after changes of 1989.
00 was a collective who was producing diverse media (performancies, recordings, films, texts, collages...) around an idea of self-published (never-published) magazine 00 created by Cyril Blažo, Stano Dančiak, Boris Ondreička, Igor Marko, Igor Čerkirda and Michal Procházka from 1987 to 1991.
00 was a platform of subcultural creativity, subversion, resistance... and last but not least humour!

The members of BLONDIAK, BLOND, and 00 groups, who belong to the same generation, started working collectively at the end of the 1980s producing short performances, installations, and actions. They formed a music band Kosa z nosa ('The Scythe from Nose') (1987), organized workshops, and in the 1990s they started exhibiting together. Their systematic recording of actions and the production of written texts have led them to found a journal which, before the era of computers, included authentic collages, type-written records, ink drawings or rub-ons . Each issue was an artifact on its own based on an original graphic concept.
Text by Mira Keratová.