A group exhibition by 29 artists, presents works being - directly or indirectly - in connection with each other. Certainly, loss of meaning may be induced through linguistic translations of sentences or expressions (lost in translation); but this show also aims at 'gathering' works of art in order to create, among others, new conceptual and formal interpretations. In turn, the techniques, disciplines, institutional context, media, supports, codes and language. 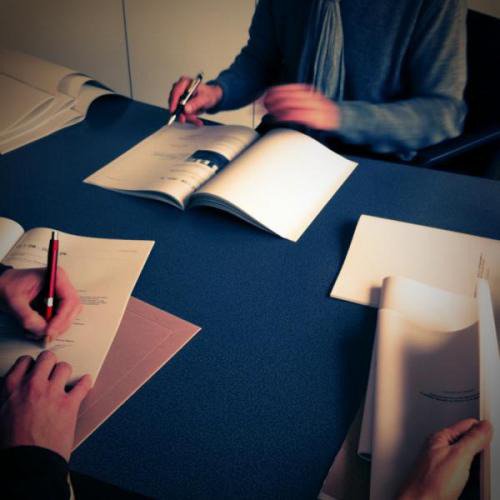 The title of the exhibition, an antonymous quotation of a well-known English idiom (“lost in translation”), plays on the ambivalence and polysemy of words in English. This can, in fact, be translated into French as “traduction” or “translation”.
The common denominator of these two “interpretations” lies in the etymological approach of the term “translation” itself, whose Latin origins refer to the action of carrying/taking something, somebody or oneself out of its normal context (from transfero, translatum).

Thus, the concept of translation here, goes beyond any restrictive semantic use, to be apprehended in a wider, metapho- rical meaning, like the subtle deliberate shifting of a being, a sign, a practice, a discipline or an area of knowledge, opened up to new perspectives of investigation, research, transmission and perception. Through this simple deviation from one perspective or from one given context to another, an implicit and subtle phenomenon of sending something back to the drawing board generally takes effect, of questioning norms, codes, languages, and accepted practices.

A phenomenon which, in our meaning, understands current art practices and research and characterises them well.
Beyond any generational approach, we find ourselves in an age where the meaning often coils up into the interstice.
Everything occurs as though the artist were creating and instilling the meaning of their work in the subtle and critical area freed by a sort of “translation” the quotation, reversed, whether changed or not, the reappropriation or a simple shift in meaning of one of the work’s parameters, as much at the level of the creative process as at that of how it is presented, communicated or even received.

Therefore, far from being restricted to a simply “linguistic” approach to the term, the exhibition unfurls through an expansion of the axes of the concept’s interpretation: in turn, the techniques, disciplines, institutional context, media, supports, codes and language find themselves, directly or in a more mediatised way, questioned by the works of the guest artists.

Found in Translation, Chapter L is the third part of curator Emmanuel Lambion’s exhibition series initiated in January 2010. Each chapter, identified by an index letter selected associatively rather than alphabetically, becomes part of a cycle which links specific declensions to different contexts, places and formats around this polymorphic subject.

The exhibition is realised with the support of Mondriaan Stichting and Fédération Wallonie-Bruxelles.