"Influence and Adaptation, 1876-1936". Auguste Rodin, the most famous sculptor of his day, not only appealed to American collectors but also had a profound influence on American artists. This exhibition is the first to examine the scope of this influence on artists such as Malvina Hoffman, Edward Steichen, Georgia O'Keeffe and others. 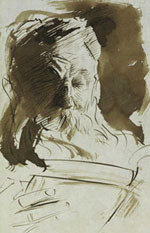 The Cantor Arts Center at Stanford University presents a comprehensive exhibition that demonstrates the influence of French sculptor Auguste Rodin (1840–1917) on a generation of American artists. “Rodin and America: Influence and Adaptation 1876–1936,” on view October 5, 2011 – January 1, 2012, includes 132 works. Admission is free.

“From the 1890s until his death, Rodin was probably the most famous artist in the Western world,” said Bernard Barryte, the Cantor Arts Center’s curator of European art. “His notoriety made him a focus of adulation and emulation, and for decades he exerted a profound influence on American art.” Exploring Rodin’s influence, the exhibition and the accompanying catalogue examine works in all media by American artists who responded to Rodin, assimilating, transforming, and finally rejecting ideas that they discovered in his sculptures and drawings. To illustrate the scope and character of this American response, “Rodin and America” features 107 sculptures, drawings, paintings, and photographs by 42 artists from 44 museums, foundations, and private collections throughout the United States. The exhibition also features 25 of Rodin’s works in bronze, plaster, marble, and watercolor.

“Rodin and America” explores the sculptor’s impact on artists in a systematic and comprehensive fashion. Barryte explains, “The broad scope of the investigation is dictated by the fact that nearly every American artist of this period had, at minimum, a Rodin ‘moment,’ and this includes such luminaries as Georgia O’Keeffe, Gaston Lachaise, and John Storrs, who became famous for accomplishments made when they passed beyond Rodin’s influence.” As works by these artists attest, within a decade of the French sculptor’s death, this crucial, first modernist phase in the development of American art was overshadowed by the trend toward abstraction and other 20th-century movements.

As a result, “Rodin and America” is also an act of rediscovery. The selection of objects highlights an exciting but relatively neglected phase in the history of American art and reacquaints viewers with once renowned masters such as Malvina Hoffman, Lorado Taft, and Gertrude Vanderbilt Whitney. Equally important, it provides new perspectives on works by such innovators as Charles Demuth and photographers Edward Steichen and Alfred Stieglitz.

The works by Rodin represent acquisitions made by prescient collectors in Boston, New York, Chicago, and San Francisco who first contributed to the spread of Rodin’s influence. These works exemplify the qualities most admired by young American artists—dynamic form, emotional richness, sensuality, complex surfaces, and the fully realized partial figure.

“Rodin and America: Influence and Adaptation 1876–1936” is accompanied by a fully illustrated catalogue featuring essays by eight scholars who examine aspects of the American response to and reaction against Rodin’s dominating presence. The exhibition and catalogue are made possible by the Robert Mondavi Family Fund, the Terra Foundation for American Art, the Henry Luce Foundation, the Hohbach Family Fund, the Iris and B. Gerald Cantor Foundation, and Cantor Arts Center Members.