Tuesday - Sunday 9am - 8pm, Closed on Mondays throughout the year (including holidays)

The invited work: Acrobat on a Ball 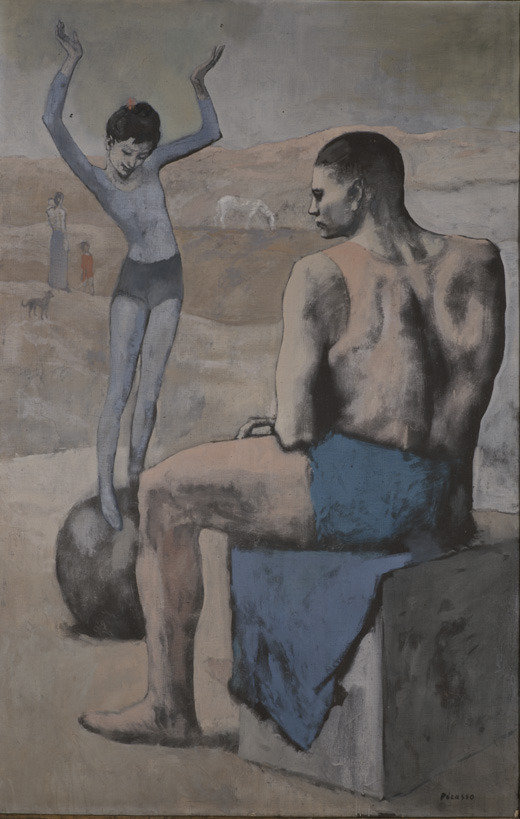 The invited work: Acrobat on a Ball. From 1904 onwards Picasso regularly went to the Cirque Medrano, which was located near his studio in the Bateau-Lavoir in Montmartre. The Impressionist painters had already been interested in the circus, attracted by its light and movement. Picasso's interest, however, was of a more universal and profound nature. Through the symbolic figures of the world of the circus he offered a reflection on the life of the artist while also using this theme as part of his process of investigation on fundamental issues of painting. The two principal figures in the present work reveal the two poles of Picasso's art: creativity and fantasy on the one hand and seriousness and rigour on the other. The figure of the female acrobat on a ball, which is also to be seen in another important painting of this date, The Family of Saltimbanques (Baltimore Museum of Art, The Cone Collection), reveals Picasso's characteristically playful temperament. His close friend, the writer Guillaume Apollinaire, interpreted this motif as a dance of the stars in reference to the radiant harmony of the cosmos. Following the intense and melancholy expressivity of the Blue Period, during his next phase, which began in Paris in 1905, Picasso focused on some of the key visual aspects of painting: precise and energetic line; closed, perfect form; and a pronounced sense of volume. His investigations led him to take a direction very different to that of the contemporary young French painters who were fascinated by the violent chromatism of Fauvism. (Image: L'Acrobate a' la Boule, Picasso. Oil on canvas. 147 x 95 cm. 1905. C The State Pushkin Museum of Fine Arts, Moscow. C Pablo Picasso Estate. VEGAP. Madrid, 2011)