A View from the Coach's Seat

The current installation in The Gallery of Crossed Destinies - that invites us to consider how our perceptions of objects change in the museum setting- is by Williams Head Football Coach Aaron Kelton. He uses inspirational quotations to motivate his players, and he brought that approach to the exhibition by pairing quotes with the particular artworks. 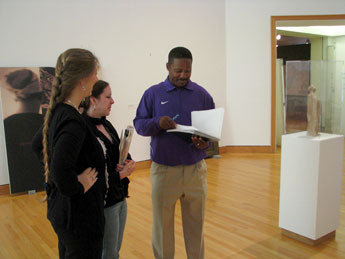 Williamstown, Mass. – The Williams College Museum of Art (WCMA) is proud to present A View from the Coach’s Seat, the current installation in The Gallery of Crossed Destinies.

Featured as one of the centerpieces of the museum’s Reflections on a Museum reinstallation project, The Gallery of Crossed Destinies invites us to consider how our perceptions of objects change in the museum setting. The current installation is by Williams Head Football Coach Aaron Kelton. Kelton, the first football coach at Williams to guide a team to a perfect record in his rookie year, was awarded the New England Small College Athletic Conference (NESCAC) Coach of the Year Award. He was also included in Sports Illustrated’s “Faces in the Crowd” on December 27, 2010. Coach Kelton uses inspirational quotations to motivate his players, and he brought that approach to the exhibition by pairing quotes with the particular artworks. When asked what his experience as a curator has been like, he responded, “This opportunity has been both very educational and extremely stimulating. As a coach we are often results-driven and lacking in creativity. This project has helped me to expand my creativity and will assist me in improving my ability to strategize as a coach.” Kelton said, “I tried to look at the artwork as I do different parts of my profession and how these different parts influence me daily. As a coach, I thought of how the art reflected my thoughts about athletics and how that perspective could influence and motivate the average person or fan. I believe that sharing my view of the exhibit as a guest curator will give fans a better understanding of a coach’s ability to lead and bring athletes to reach their full potential.” The Gallery of Crossed Destinies exhibition opening reception, Monday Football & Art “Pep Rally” will be held October 24 from 4:00–6:00 p.m. The exhibition will be on display Saturday, October 8 through Sunday, December 4, 2011.

Coach Kelton is the final of four guest curators invited by the museum to organize the exhibition in The Gallery of Crossed Destinies. The other guest curators were local florist Chad Therrien, a group of high school students from Mt. Greylock Regional High School, and Williamstown Theatre Festival Artistic Director Jenny Gersten. Each guest curator was asked to create their own narratives from a miniature “collection” of 25 artworks. They each responded to the same objects to conceive a distinct exhibition, determining every aspect of presentation from art placement to wall text. Each exhibition explores how objects evoke stories and how these narratives change depending on how they are presented and who presents them.

The artwork presented in The Gallery of Crossed Destinies features an eclectic mix of some of the museum’s finest treasures. The collection includes such items as oil paintings by Robert Motherwell and George Inness, a 19th century South Indian playing card, and sculpture by Louise Nevelson and Claes Oldenburg. The exhibitions are on view in the Class of 1935 Gallery, where three large windows have been reopened after having been covered for almost 20 years. This new, dramatic light has had a transformative effect on the gallery space. The windows act as a metaphor for the project as a whole, visually connecting the museum with the outside community.

The Gallery of Crossed Destinies has been facilitated by project manager Miriam Stanton, Graduate Student in the History of Art, Class of 2011; Lisa Corrin, Class of 1956 Former Director of the Williams College Museum of Art; Joann Harnden, Coordinator of Education Programs; and Cynthia Way, Director of Education and Visitor Experience.

About Aaron Kelton
A native of Massachusetts Kelton was born in Boston and graduated from Wellesley High School, where he was a three-sport athlete, competing in football, basketball, and baseball. He graduated from Springfield College in 1992 with a B.S. in psychology and lettered all four years for the Pride in football, starting two years as a quarterback. He was the defensive coordinator at Columbia University and before that was an assistant for three seasons in the NFL, moving from the Indianapolis Colts to the Jacksonville Jaguars to the Arizona Cardinals. Coach Kelton is the first African-American head football coach in the NESCAC and is the first coach in 125-year history of the Williams football program to have a perfect [8-0] record in his debut season.

The Williams College Museum of Art
The Williams College Museum of Art is located on Main Street in Williamstown,
Massachusetts. It is open Tuesday through Saturday from 10:00 a.m. to 5:00 p.m. and Sunday from 1:00 to 5:00 p.m. The museum is wheelchair accessible and open to the public. Admission is FREE. For more information, contact the museum at (413) 597-2429 or visit wcma.williams.edu.