A solo exhibition of paintings and drawing by LA based Austrian artist. Taking portraits of friends and acquaintances as his material, he documents a poetic world of nature and architecture, of private interiors and sunlit gardens. 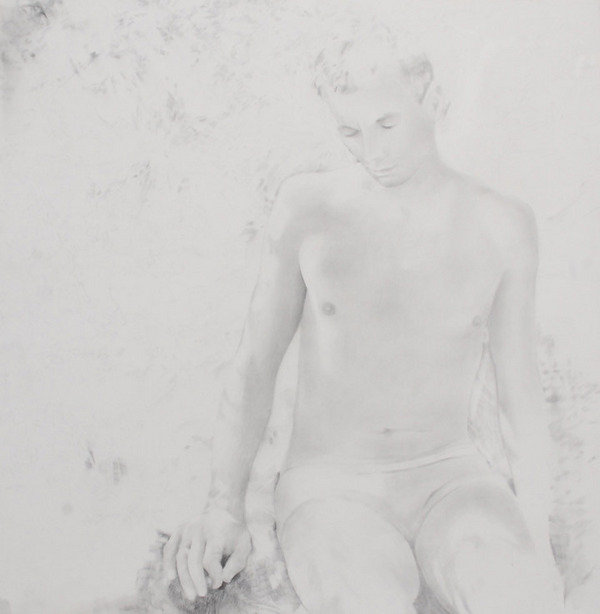 UNION gallery is pleased to present a solo exhibition of paintings and drawing by LA based Austrian artist Christoph Schmidberger.

Christoph Schmidberger’s naturalistic, figurative paintings dispense a certain sensuality coupled with a deliberate detachment. Taking portraits of friends and acquaintances as his material, he documents a poetic world of nature and architecture, of private interiors and sunlit gardens. The meticulously executed surfaces of his paintings in oil and acrylic render his subjects perfect and inscrutable, the sheen of their hair and eyes highlighted almost to overexposure. Placed in classical poses their protracted gaze lends an element of intrusion to the scene as if the viewer were privy suddenly to unseen rooms and private moments.

Schmidberger often contradicts the realism in his paintings with exacting areas of abstraction and dashes of chromatic enhancement. Any familiarity or intimacy that might be afforded a scene or its subject is masked by an immaculate and impersonal execution. Touching on the same subjects are his works on paper. In contrast to his painting’s saturated and iridescent palette, Schmidberger’s drawings are hyper ethereal and delicate studies in black and white almost disappearing into the paper like photographic plates or portraits from cinema’s golden age. The artist deliberately chooses ambiguous titles for his works that are both redolent and misleading in the context of his paintings. Removing the importance of his protagonists’ activities and identities, Schmidberger explores an image focused, self-consumed LA lifestyle with an indifference much found in the work of Gerhard Richter and Andy Warhol; the protagonist’s guise reaffirming the artist’s distinction between reality and his documentation of that reality.

‘In the seventies, Franz Gertsch's huge canvases were often interpreted as a mere exercise in style, influenced by the American Hyperrealism of Chuck Close and Richard Estes. It was only years later that we able to truly appreciate Gertsch's intentions for what they really were: a celebration of the Blow Up, the explosion of colour in cinema and European Hippy culture. It is dangerous to make predictions in art, however the idea that in thirty years or so the young, uninhibited and exhibitionist universe depicted by Schmidberger may be seen as a portrait of the inconsistencies that marked the first decade of the third millennium, is something more than a suspicion.’