in Media Field. This exhibition features artists' videos that address world and national events, including works by Walid Ra'ad, Paul Chan, Kerry Tribe, Omer Fast, and Johan Grimonprez. These videos examine the cultural, textual, and sexual aspects of domestic and international affairs, along with the media's role in shaping experience. 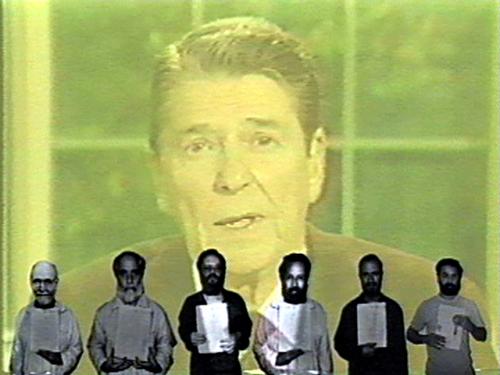 Williams College Museum of Art (WCMA) will open polÂ·iÂ·tick in Media Field on January 18, 2003. This exhibition features artists' videos that address world and national events, including works by Walid Ra'ad, Paul Chan, Kerry Tribe, Omer Fast, and Johan Grimonprez. These videos examine the cultural, textual, and sexual aspects of domestic and international affairs, along with the media's role in shaping experience. polÂ·iÂ·tick will remain on view through June 29, 2003.

"This new program demonstrates the impact of world events and the role of the media, seen through the eyes and cameras of five very different and talented video artists," says Director Linda Shearer. "Media Field, the WCMA gallery dedicated to video, is celebrating its first full year of activity. Lisa Dorin has done a remarkable job of presenting current video work relating specifically to the Williams College curriculum, as well as to larger contemporary themes."

polÂ·iÂ·tick is divided in two parts. The first section, showing Dead Weight of a Quarrel Hangs and Re: The_Operation, will run from January 18 through April 20. The second part, with Untitled (Potential Terrorist) and Hostage: The Bachar Tapes, begins on April 29 and goes through June 29. CNN Concatenated will be shown every day throughout the run of the show, and dial H-I-S-T-O-R-Y will be shown continuously every Wednesday, in place of the other programs.

Two pieces by Walid Ra'ad investigate the possibilities and limits of writing history: Dead Weight of a Quarrel Hangs (1999) and Hostage: The Bachar Tapes (2001). Both works do not document history but rather explore what can appear as rational, mentionable, and thinkable about the Lebanese Civil Wars. Hostage offers the "testimony" of Souheil Bachar, who recounts the social and sexual aspects of his detention with American hostages in Lebanon in the 1980s.

Paul Chan's Re: The_Operation (2002) explores the personal and philosophical dynamics of war through the members of George W. Bush's administration as they physically engage each other and the "enemy" in the war against terrorism. This piece offers a critique of the neuroses and obsessions compelling these characters.

Untitled (Potential Terrorist) (2002) by Kerry Tribe is a black and white silent film of screen tests by actors who answered a casting call that read, "Potential Terrorist: any age, gender, ethnicity. Must look like a terrorist." By answering the ad, the actors-all various physical types-become victims of their own stereotypes, and viewers are led to decide for themselves who does or does not resemble their conception of a terrorist.

Also included in polÂ·iÂ·tick is a mesmerizing, rapidly edited collection of footage from CNN. Omer Fast's CNN Concatenated (2002) is remarkably spliced together, as each word in the video jumps from a different newscaster's mouth. This confrontational piece challenges viewers about their own importance as well as their shallowness, weakness, hypocrisy, and self-absorption.

Johan Grimonprez's dial H-I-S-T-O-R-Y (1997) is a video-film chronology of airline hijackings around the world. The fictional narrative soundtrack "highlights the spectacular in our catastrophic culture," according to Mr. Grimonprez. This powerful combination of photographs, digital images, news reports, clips from science fiction movies, and other found footage denounces the media's obsession with disaster and investigates how the media shapes reality and history.

The Williams College Museum of Art is open Tuesday through Saturday, from 10 a.m. to 5 p.m., and on Sunday from 1 to 5 p.m. Admission is free and the museum is wheelchair accessible.