White Cube announces the opening of a third major space in London, designed by Casper Mueller Kneer Architects, presenting an exhibition for each gallery of the space: Structure&Absence displayed in the South Galleries takes a fresh look at contemporary abstraction, using Chinese scholars' rocks as an organising device. Inside the White Cube features artists who have not previously shown at the gallery, in this case Marieta Chirulescu, Mary Corse and Kitty Kraus. The space 9x9x9 hosts the work by Cerith Wyn Evans and eventually the Auditorium presents Jake and Dinos Chapman. 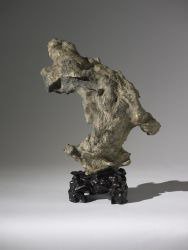 White Cube is pleased to announce the opening of a third major space in London. The building, located on Bermondsey Street in south London, will open to the public during Frieze on 12 October 2011. This will be the largest of the gallery's three London sites, providing more than 5440 m2 (58,000 sq ft) of interior space on a site of 1.7 acres (74,300 sq ft). The building dates from the 1970s and was primarily used as a warehouse before the current refurbishment.

White Cube Bermondsey has been designed by Casper Mueller Kneer Architects who are based in London and Berlin. The building has been altered to include three principal exhibition spaces, substantial warehousing, private viewing rooms, an auditorium and a bookshop. The 'South Galleries' will provide the principal display area for White Cube's expanding programme of significant exhibitions. Three smaller galleries, collectively known as the 'North Galleries', will feature an innovative new programme of exhibitions. In addition, at the centre of the building, there is a gallery of 81m2 entitled ‘9 x 9 x 9’. An auditorium will allow White Cube to present an education programme, artists’ films and lectures.

9 × 9 × 9
12 October — 3 December 2011
9 × 9 × 9 is a centrally located, naturally-lit gallery, measuring eighty one square metres, which is the location for special presentations and displays of new art.
Presenting: Cerith Wyn Evans