Gibellina, a small Sicilian village destroyed in a 1968 earthquake, serves as the focus for the artist's recent body of work and the subject of two films, produced during a year-long residency in Italy. Zarka documents forms. Rather, he collects them, teasing out relationships across different contexts and media. Zarka punctuates his research and subsequent displays with objects and images drawn from a vast swathe of source material. 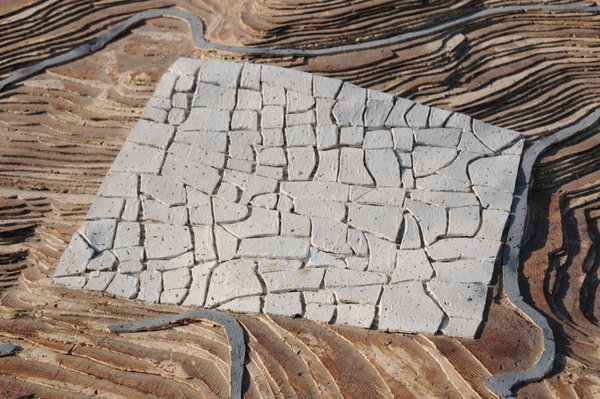 Raphaël Zarka documents forms. Rather, he collects them, teasing out relationships across different contexts and media. In an interview with Elisabeth Wetterwald the artist says: 'For a documentary practice to be more than just a collection of various documents, one mnemosyne among others, it has to engage in modes of production / restitution such as the copy, the replica, the reconstruction, or the readymade.' It is this propensity to combine or offset production with restitution, via differing techniques and modes of display, which imbues Zarka's self-styled documentary practice with a sense of formal and intellectual discovery.

Gibellina, a small Sicilian village destroyed in a 1968 earthquake, serves as the focus for the artist's recent body of work and the subject of two films, produced during a year-long residency in Italy. In the first Gibellina Vecchia (2010), Zarka documents Il Grande Cretto, a vast concrete memorial sculpture made by Alberto Burri in the 1980s. The sculpture, covering hundreds of metres but never completed due to lack of funding, is based on the Italian artist's cracked paintings: an immense mass of fractured grey that smothers the landscape, its layout mimicking the buildings and streets of the former village. Shot on super 16 and awash with the muted colours of the Sicilian hills, architects are seen surveying the sculpture, local farmers strolling past and students chatting amongst the abstract shapes. The artist's characteristically straight camera work and unfussy editing hones in unemotionally on the sculpture, showing how it is experienced, used and understood by differing people. The detached, documentary footage shows how a sculpture, a form, becomes reconfigured over time: what was a grand response to a tragic event now serves a more humble, quotidian role.

In 14 views of Gibellina Nuova (2011) Zarka turns his gaze to the eponymous town built 20km from the ruins to house residents displaced by the earthquake. Constructed in the 1980s by Italy's leading architects and home to a number of public works gifted by prominent artists, the town was intended as a monument to the country's modernist credentials. The film comprises a sequence of 14 shots of bold architectural designs and formalist public sculpture that now sit in a state of disrepair - the town a modernist ruin unable to live up to its original goals. For Zarka, Gibellina Nuova appears as a relic of failed ideals, a site of unrealised potential - yet also as testament to the promise invested in art.

Whilst Gibellina serves as a starting point, Zarka punctuates his research and subsequent displays with objects and images drawn from a vast swathe of source material. For example, an 18th century Piranese etching, showing plans for the city of Rome, is used as the basis for La déduction de Giovanni Battista (2011), a wooden sculpture whose cut-out forms mimic the boulders and contours of Il Grande Cretto. The Piranese etching - produced 200 years before the Gibellina work - is reconstituted as an echo of Burri's form. Equally, La déduction de Burri (2011) is a manifestation of the unrealized section of Il Grande Cretto - an empirical rendering of the missing section of Burri's public monument. Isolated from its surrounding landscape, Burri's motif is reduced to a formal design. Shown alongside photographs and found objects, Zarka's interpretations become further iterations in a never-ending sequence of forms where the found, copied or constructed are deployed to build up Zarka's alternative formal categorisation.

In the series 'Reconstructed Angles' Zarka appropriates forms from Renaissance paintings, isolating and reconstituting them as abstract, architectonic sculptures. Pieces of furniture that appear in the works of Italian masters such as Uccello or Antonello da Messina are meticulously constructed, their perspectival rendering translated into three dimensions. Shown in isolation the sculptures appear as miniature monuments to the Renaissance and its principles, when art and science fed off one another's advancements. Viewed within the context of Gibellina, however, Zarka's sculptures bear testament to the artist's excavation of a myriad of different sources - an excavation that points to form's constantly evolving potential.

Raphaël Zarka, born in Montpellier, France in 1977 lives and works in Paris. In 2008 he was awarded the Ricard Foundation prize for contemporary art. He is currently undertaking a residency at the Villa Medici, Rome.