Mixing art historical references with images taken from the internet, the subject of his paintings matter knows no limits: from icons of popular culture to much admired paintings of the past such as Georges Seurat's Bathers at Asnieres, or the lonesome cowboys in a Steven Spielberg film. No conventional boundaries are valid: public mixes with private, Romanticism fuses with Realism. This exhibition surveys his work of the past ten years and is complemented by a selection of Sasnal's shorts and feature films screened as part of the accompanying events programme. 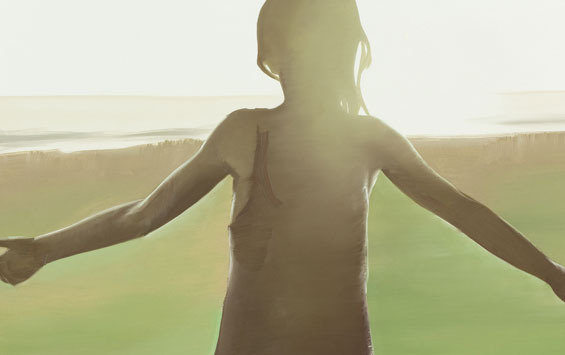 The Whitechapel Gallery presents the first major UK exhibition of Polish artist Wilhelm Sasnal, a leading figure in contemporary painting.
Wilhelm Sasnal paints images from everyday life and the mass media. His paintings range from portraits of his family and friends to icons of popular culture such as Roy Orbison, from a news image of a young girl rescued from the wreckage of the recent Tsunami in Japan to troubling chapters in the history of Poland including World War II and the Holocaust.

Stylistically, Sasnal’s work fuses Romanticism with Realism, and Pop with Abstraction, demonstrating his knowledge of and passion for the history of painting and painting as a medium. He takes images from the multitude available in comic books, newspapers, television and online that might otherwise be overlooked to create a unique and highly personalised record of contemporary life.

The Whitechapel Gallery exhibition offers a survey of Sasnal’s work made over the last decade, from 1999 until 2011, with more than 60 paintings and a selection of his films displayed in the galleries.

The exhibition is divided into three sections and opens with Sasnal’s recent work, made between 2005 to 2011, that draws from images in the mass media and his world travels. The second section returns to a key moment in his early career, bringing together works that explore Poland’s role in World War II, including comic book style interpretations of Maus, Art Spiegelmann's cartoon narration of the Holocaust. The third section spans 2001 to 2005, with a selection of works that focus on the use of film and photography in his painting, as well as Sasnal’s continued interest in life, past and present, in Poland.

Sasnal’s recent feature-length films and a selection of shorts will be screened as part of the accompanying programme in the Zilkha Auditorium.

The exhibition will be accompanied by a Whitechapel Gallery publication. It will complement a new comprehensive monograph on William Sasnal to be published by Phaidon.

Wilhelm Sasnal is organised in collaboration with Haus der Kunst, Munich. The exhibition is supported by the Polish Cultural Institute in London and the Adam Mickiewicz Institute as part of the International Cultural Programme of the Polish EU Presidency. With thanks to Sadie Coles.

Friday 14 October, 3pm the artist discusses the themes, figures and cultural references in his paintings and films with Achim Borchardt-Hume, Chief Curator.

The media view for Wilhelm Sasnal is 10am–12pm, Tuesday 11 October, with a special tour of the exhibition by Achim Borchardt-Hume, Chief Curator, Whitechapel Gallery, at 10.30am.