The Ambivalence of Identity. Some of the most interesting artists working today present sculpture, film, photography and installation in this exhibition exploring living with more than one culture. Artists Simon Fujiwara, Anthony Key, Dave Lewis, Nina Mangalanayagam and Navin Rawanchaikul combine a seriousness with humour and irony to discuss cultural identity and belonging. An inter-generational exhibition presented by Iniva (Institute of International Visual Arts). 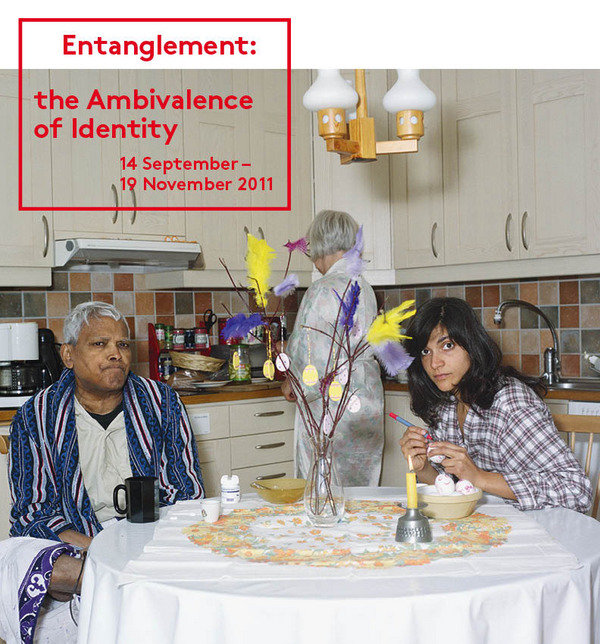 Iniva (Institute of International Visual Arts) presents an inter-generational exhibition at Rivington Place with some of the most interesting young artists working today alongside established figures. Artists Simon Fujiwara, Anthony Key, Dave Lewis, Nina Mangalanayagam and Navin Rawanchaikul reflect on the complexities of living with more than one culture. They explore their own identities, and bring past debates into the context of today's globalised society.

Cultural identity, belonging and affiliation are discussed with a mixture of seriousness, humour and irony. This poignant and original selection of sculpture, film, installation and photography shows a fascination with how the artists see themselves and how others see them, reminding us that our identities are continuously shifting as we negotiate society.

Simon Fujiwara's work is a constant process of scripting his own biography through fiction writing, performance and set-installations, symbolic props and absent characters become protagonists in his circular histories. In the video and installation Artist's Book Club: Hakuruberri Fuin no Monogatari he performs a role in a spoof TV arts programme, discussing the language used in Mark Twain's Huckleberry Finn in an analysis of cross-cultural confusion and fetishisation.

Anthony Key's sculptures use food to playfully unpick certain ‘Chinese' stereotypes. A new installation for the window incorporates 8,000 chopsticks drawing attention to the restaurants and take-aways around the UK. Dave Lewis combines photography with ethnographic research as a premise for his richly textured installations. He invites the viewer to consider their own sense of place, belonging and identity through classifications based on family, race, religion and the State.

Nina Mangalanayagam, a recent graduate from the RCA, explores the fluidity of identities looking at family relationships and national identity. In the video piece Lacuna the artist attempts the ‘Indian Head Nod' which is used heavily in South Asia; the photographic series Homeland comments on traditional absurdities and the struggle to fit in. Navin Rawanchaikul's work focuses on local identity and its shifting dynamics within globalised culture. In the installation Hong Rub Khaek (Khaek Welcome) he interviews Indian migrants living in Chiang Mai, Thailand, about their experiences of making a home in a new culture.

Nina Mangalanayagam recently graduated with an MA in Photography from the Royal College of Art. Group exhibitions include International Departure - Gate 10, Fondazione Fotografia, Modena, Italy (2010), Festival of Video Art, Camaguey, Cuba, Figures of Speech part of Film and Video Umbrella's Free to Air Festival, Simply Screen at The Bhavan, London(2009). She won the Jerwood Photography Award in 2005. Nina Mangalanayagam was born and grew up in Sweden with a Danish mother and a Tamil father.
http://www.ninamanga.com/

The accompanying programme of events includes a curator's tour with Tessa Jackson on 15 October at 6.30pm (the gallery is also open late until 9pm), and an artists' tour with Anthony Key and Nina Manalanayagam on Saturday 12 November at 3pm.