'Becoming Istanbul' depicts the rapid change that has put the formation of urban spaces and urban life under pressure. '90' is a program of events including lectures, tours and performances seeking to answer questions around contemporary Istambul. 'The Making Of Beyoglu' is a series of workshops discussing the methodology and implementation of projects initiated in the city's center. 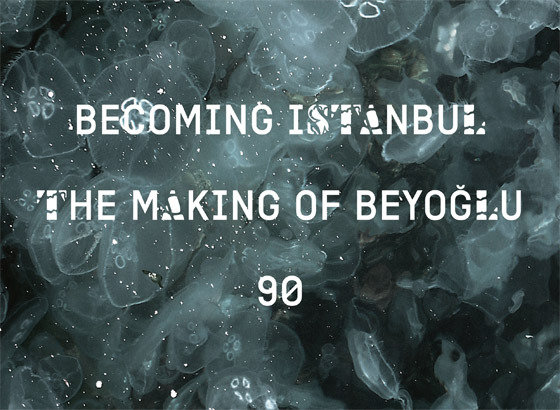 SALT Beyoğlu's second comprehensive exhibition Becoming Istanbul, accompanied by parallel programs 90 and The Making Of Beyoğlu, will open September 13, 2011. Turkey's aim to find itself a valid place within the global networks of politics, economy, commerce, culture and tourism has become the burden of İstanbul. The city is promoted to new users, both locally and internationally, with imagery far removed from its actual overall state and infrastructure. SALT Beyoğlu will host three projects that examine İstanbul from different vantage points, attempting to offer a more multifaceted understanding of the city.

With an accumulation of resources relating to contemporary phenomena and production in İstanbul, Becoming Istanbul depicts the rapid change that has put the formation of urban spaces and urban life under pressure. As part of the Becoming Istanbul project, hundreds of media have been collected with the cooperation of artists, architects, cartoonists, researchers, news media and cultural institutions. This material is organized in an interactive database where users can explore the network of concepts that define İstanbul's present. The exhibition's structure is nonlinear; each viewer may chart his or her own course through the database, making each experience of Becoming Istanbul unique. The internal dynamics of the database's content as a whole, not visible in individual navigations, will also be interpreted by Burak Arıkan in a work deciphering the relationships between concepts and time.

The framework of Becoming Istanbul was conceieved by Pelin Derviş, Bülent Tanju and Uğur Tanyeli in 2008. They also edited the publication Becoming Istanbul, a multi-authored critical dictionary published in Turkish, English and German. Two other books published as part of the project were Tracing Istanbul (from the air), edited by Meriç Öner, which discusses the causes and effects of changes in İstanbul's urban texture based on the aerial photography of Oğuz Meriç; and Mapping Istanbul, co-edited by Pelin Derviş and Meriç Öner, a visualization of the city through maps.

Developed in parallel to Becoming Istanbul, 90 is a program of events including lectures, tours, presentations and performances seeking to answer questions around contemporary İstanbul. During the project, 90 events will be organized to share the phenomena and potential of the city, with the objective to resist an exclusionist or "expert" stance through a broad profile of speakers and diverse array of topics. Those wishing to contribute to the development of 90 can propose topics and speakers in the suggestion box at the entrance of SALT Beyoğlu, or on the Facebook page "SALT Online – Proje İstanbul."

Becoming Istanbul and 90 will also be accompanied by The Making Of Beyoğlu, a series of workshops discussing the methodology and implementation of projects initiated in the city's center. Examining specific case studies in İstanbul's Beyoğlu district, The Making Of Beyoğlu was developed in collaboration with Rotterdam-based Bureau Venhuizen. As part of the exhibition, examples of spatial planning projects will be discussed within the framework of "The Making Of," workshops designed by Hans Venhuizen in the form of games. The project seeks to examine proposed changes to Beyoğlu in an open dialogue with participants of different backgrounds. The Making Of Beyoğlu workshops, supported by the Netherlands Architecture Fund (Stimuleringsfonds voor Architectuur), are open to individuals from all disciplines across İstanbul. Registration for workshops can be completed on the Facebook page "SALT Online – Proje İstanbul."

Through Becoming Istanbul, 90 and The Making Of Beyoğlu, SALT shares its enthusiasm for and experience in urban research. The graphic and spatial design of these projects, to be presented on SALT Beyoğlu's second and third floors, is carried out in collaboration with design firms Project Projects and Superpool. Designed by Evren Yantaç and developed by Hüseyin Kuşçu, the interactive database is already online and will remain fully accessible as a contemporary urban archive following the duration of the of the exhibition.