The city of colour / Vasarely Go Home. Fogarasi examines the aestheticization and commercialization of urban space and the use of architecture, art and design as instruments of legitimation at the service of power, using different media and formats, from video, photography and text up through installation art and sculpture. The project for the Museo Reina Sofia analyzes the instrumentalization of abstract art as a token of modernity during the Cold War. 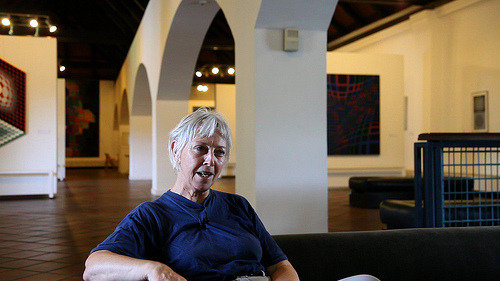 As part of its Fissures program, the Museo Nacional Centro de Arte Reina Sofía is producing the latest project by the Viennese artist Andreas Fogarasi (1977), currently in progress. Awarded the Golden Lion for his installation in the Hungarian pavilion at the last Venice Biennale, Fogarasi is one of the most noted young promises from Austria. Trained at the School of Architecture and Fine Arts in Vienna, this artist reflects in his work on how contemporary cities can be converted into an image, a brand. Through an analysis of interventions in space, architecture and typography, Fogarasi explores the development of visual communication as a key element in the speculative strategies of political and economic powers and in current models of representation.

The project he is carrying out for the Museo Reina Sofía will analyze the instrumentalization of abstract art as a token of modernity during the Cold War. It will consist of a video installation and a series of photographs and logotypes laid out on marble structures exhibited in different parts of the museum.

Andreas Fogarasi (Vienna, 1977) examines the aestheticization and commercialization of urban space and the use of architecture, art and design as instruments of legitimation at the service of power, using different media and formats, from video, photography and text up through installation art and sculpture. In his work, Fogarasi articulates broad, complex webs of discourse that explore the mechanisms by which cultural hegemony is represented, as well as their possible fault lines. His pieces are referential and didactic in appearance but also have a strong aesthetic and formal presence, in which echoes of minimalism and conceptual art can be heard.

With a transversal reading of history and a critical use of exhibition space as the point of departure, in this show the artist analyses the use of abstract art as an element of modernism during the Cold War and explores how this fact can be associated with the process by which contemporary cities have become settings of representation and control. The exhibition's central piece is the documentary Vasarely Go Home, which talks about a twofold event that took place on 18 October 1969 in Kunsthalle Mücsarnok (Budapest). It was the day of the inauguration of the first large retrospective dedicated in Hungary to Victor Vasarely (Pecs, 1908- Paris, 1997), a show presented as a gesture of openness and political normalisation, and also the day that an artist named János Major carried out a discreet yet significant intervention. He attended the inauguration with a small sign saying “Vasarely Go Home!" which he surreptitiously showed to some of the people in attendance.

In addition to the documentary -in which various representatives of the Hungarian cultural scene at the time talk about the significance of the Vasarely retrospective and recall Major's action-, Fogarasi has also installed a series of panels (built in the same white marble as the floor of the Sabatini Building) that function as sculptures and at the same time as display structures. On these panels we find everything from images of the projects designed by Vasarely to decorate and personalise the gloomy facades of the apartment blocks seen throughout the outskirts of Hungarian cities in the 1960 and 70s, to photographs of contemporary urban scenes that illustrate how the legacy of modernism can be seen in the design of public space and in what is called spectacle-architecture. The exhibition also includes a group of panels, this time without photos or textual inscriptions, whose abstract forms were inspired by the logos of various international cultural institutions.