Narratives of Progress from Elsewhere. The exhibition presents a number of artistic positions by international artists from different generations that reflect upon alternative visions for the future and models for political and cultural change that have emerged in response to the new conditions of the post-Cold War era. The artworks speak powerfully about the necessity to think beyond today's neoliberal brand of progress. Accompanying the exhibition is a filmbased program of screenings and discussions. 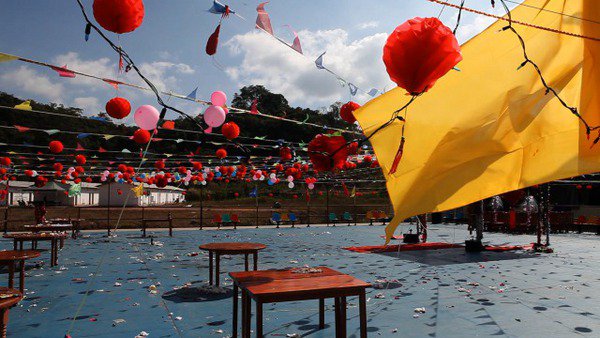 The exhibition Spacecraft Icarus 13: Narratives of Progress from Elsewhere presents a number of artistic positions by international artists from different generations that reflect upon alternative visions for the future and models for political and cultural change that have emerged in response to the new conditions of the post-Cold War era. The artworks speak powerfully about the necessity to think beyond today’s neoliberal brand of progress.

The exhibition Spacecraft Icarus 13, as its title suggests, symbolically collapses together the narrative of the mythical flight of Icarus with that of a concrete historical saga, namely the United States’ space-conquering mission Apollo 13. In so doing it creates a ground from which to seek out the contemporary Narratives of Progress from Elsewhere indicated in its subtitle. The Apollo space program, which played out the US’s competition with the USSR in the ideological fight for Cold War supremacy under the flag of “progress,” saw its 1970 mission fall short when grave technical failures made a lunar landing impossible. Similarly, if an imaginary “Icarus 13” set out on a mission to the sun—as one of the works in the show proposes—it would necessarily fail: just as in the case of its Greek predecessor, getting too close to the sun would cause the craft to fall to its death.

Yet the absurdity of such a mission is not what’s at stake here, and neither is a desire to revitalize the discussion about the divisions of the world driven by the doctrine of progress. Despite the complex philosophical, political, and historical controversies the notion of progress invites into the discussion, there is a powerful motivational aspect inherent in it. As a forward-looking ideal of improvement, it invites us to think the future beyond today’s devotion to the principle of unfettered global economic growth. This is what curator Cosmin Costinaş had in mind when he brought together artists from various parts of the world—but mainly from “elsewhere”— in order to identify a network of knowledge and dialogue from beyond the territories once (directly) involved in the Cold War rivalry. The works speak powerfully about the necessity to think beyond, in Costinaş’s words, “today’s neoliberal brand of progress,” which repackages “decay and confusion” into its incessant hegemonic practice. And although it might seem improbable to imagine an end to this neoliberal mission—perhaps as implausible as landing on the sun—where if not in the space of art can we shift the limits of what is imaginable, and with it the boundaries of possibility?

I would like to sincerely thank all artists in the exhibition for their powerful works. I also thank all other contributing practitioners who are activating the exhibition through a series of bi-weekly programs, as well as Christina Li, FORMER WEST research and project coordinator, who curated the series. Many thanks are also due to all my colleagues at BAK, who brought the project to life.

Finally I would like to take this opportunity to thank Cosmin Costinaş. This is the last exhibition he has put together in his capacity as BAK’s curator. He has been an inspiring colleague and close friend, and will be greatly missed. I wish him all the best in his new position of Executive Director and Curator at Hong Kong’s Para/Site Art Space; I know he will continue to challenge the art world and the world at large, making his what he, from the perspective of the so-called West, has called the “elsewhere.”

Accompanying the exhibition Spacecraft Icarus 13 is a filmbased program of screenings and discussions that presents alternative accounts of the impact of socio-political changes brought about by western-driven discourses of progress and modernity in the “Third World.” These filmic voices from Latin America, Africa, and Asia, which emerged after decolonization, are also known as “Third Cinema.” Distinctively different in technique and content from mainstream cinema, the variety of formats presented within this program spans from documentaries to epics, and highlights the articulation of aesthetic and political concerns within Third Cinema from the 1960s to the present day. Using cinema as a space of self-representation and transformation, these films articulate cultural and political critiques of today’s realities and reflect on historical processes such as projects of nation-building, which are often seen as a continuation of the West’s imperialistic impulses. As a counter voice, these practices elicit new models and possibilities in articulating other visions of the past, present, and future.

The program is curated by Christina Li and organized within the framework of the project FORMER WEST.
FORMER WEST is a long-term international research, education, publishing, and exhibition project (2008–2014), which from within the field of contemporary art and theory: (1) reflects upon the changes introduced to the world (and thus to the so-called West) by the political, cultural, artistic, and economic events of 1989; (2) engages in rethinking the global histories of the last two decades in dialogue with post-communist and postcolonial thought; and (3) speculates about a “post-bloc” future that recognizes differences yet evolves through the political imperative of equality and the notion of “one world.”