Nature as a vulnerable factor in the worldwide pursuit of progress. In a carefully composed exhibition the museum presents different, contrasting perceptions of nature, depicted by contemporary artists whose roots lie in Western and non-Western cultures. With twelve very different visions of nature/culture in the form of sculptures, installations, videos, drawings, paintings or combinations of these media. 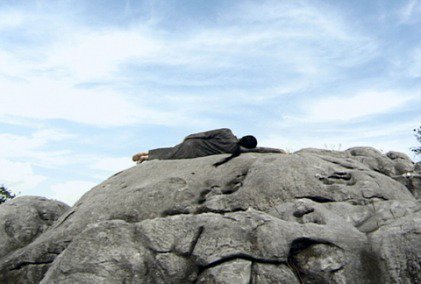 Windflower, Perceptions of Nature is an exhibition in which the Kröller-Müller Museum focuses on a specific aspect of nature: nature as a vulnerable factor in the worldwide pursuit of progress. The museum examines the subject from a broad perspective and from a wealth of various cultural backgrounds. The exhibition runs from 9 October 2011 until 15 January 2012.

The exhibition brings together a carefully selected group of artists from different continents and cultures – Western and non-Western – whose work expresses an outspoken relationship to nature. These are artists with a critical view of the world, who are aware of the increasing global concern for nature’s future and the earth’s sustainability. They connect these contemporary issues to traditions and ways of thinking that derive from various cultures in order to create a new vision of the future.

The result is an exhibition with twelve very different visions of nature/culture in the form of sculptures, installations, videos, drawings, paintings or combinations of these media. The works are spread throughout the galleries and corridors, starting with a majestic bouquet of flowers by the Dutch artist Willem de Rooij in the first gallery. Text sculptures by Yoko Ono, entitled Pieces, run like a poetic thread through the exhibition. Placed on the museum’s large windows, they connect the interior and the landscape.

The exhibition is accompanied by an English-language publication entitled Windflower, Perceptions of Nature, ISBN 978-90-5662-836-9 (€29.50). The exhibition and the publication have been made possible in part with the support of the SNS REAAL Fund and the Mondriaan Foundation.

During the exhibition Windflower, Perceptions of Nature, an extensive programme of workshops, lectures and performances will take place at the museum (almost) every weekend. Besides special workshops by artists, the museum offers workshops walking with a dowsing rod, Tai Chi and workshops for children. Theatre Group Pluim (4+) will perform and Joep Pelt will give a musical talk and concert. In november, there will be a lecture about the eco-cathedral and autor Koos van Zomeren will talk about his new book.

The exhibition had its official opening on Saturday 8 October
During the opening, a publication was launched to accompany the exhibition, one of the book’s authors Jos ten Berge held a lecture and there was a discussion between artists Willem de Rooij and Kimsooja with Dominic van den Boogerd, director of De Ateliers in Amsterdam.

Kröller-Müller Museum
Houtkampweg 6 - 6731 AW Otterlo
The museum is open to the public all year round from 10.00 to 17.00.
The sculpture garden closes at 16.30.
Because the museum is situated within the National Park you must buy a ticket for both the museum and the park