A Beautiful Elsewhere. For this exhibition, the foundation has opened its doors to the community of mathematicians and asked artists to accompany them in order to create opportunities for seeing, hearing, doing, thinking and interpreting mathematics. 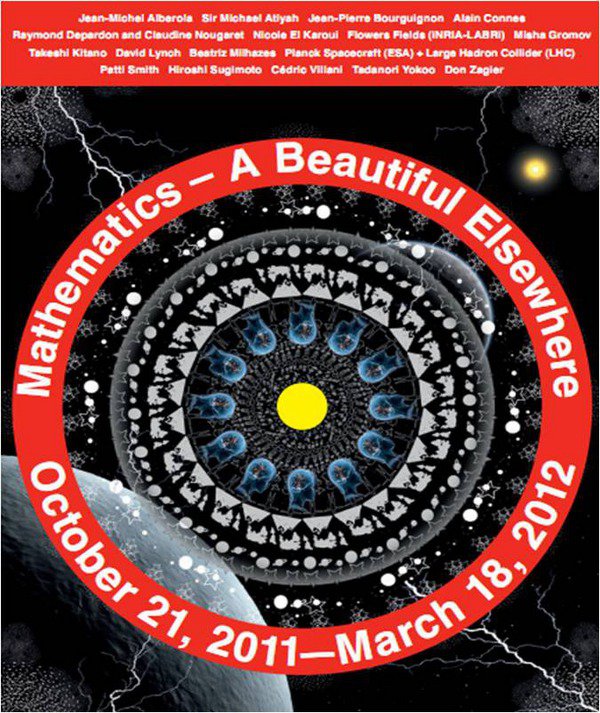 From October 21, 2011 to March 18, 2012, the Fondation Cartier pour l’art contemporain will present the exhibition Mathematics: A Beautiful Elsewhere, an exhibition developed in association with the Institut des Hautes Études Scientifiques (IHÉS) and under the patronage of Unesco. For this unprecedented event, the foundation has opened its doors to the community of mathematicians and asked artists with whom it has worked closely in the past to accompany them in order to create opportunities for seeing, hearing, doing, thinking and interpreting mathematics. By bringing mathematics into its premises, the Fondation Cartier is itself undergoing the “sudden change of scenery” described by the mathematician Alexandre Grothendieck. Mathematics is everywhere, from the finite boundaries of material reality to the infinite vastness of conceptual universes.

It embraces both the real world and the world of ideas; its protagonists are thus writers, discoverers and inventors. Michel Cassé, an astrophysicist, and Hervé Chandès, general director of the Fondation Cartier, guided by the mathematician Jean-Pierre Bourguignon who heads the Institut des Hautes Études Scientifiques, conferred with numerous mathematicians and scientists, and invited six of them to be the exhibition’s overseers: Sir Michael Atiyah, Alain Connes, Nicole El Karoui, Misha Gromov, Cédric Villani And Don Zagier. Representing a wide range of geographical backgrounds and mathematical disciplines, they are among the most prominent researchers in the world today in fields such as number theory, algebraic geometry, differential geometry, topology, partial differential equations, probability, and mathematics applied to biology among other disciplines. In order to make these researchers feel at home in its spaces, the Fondation Cartier has assembled a group of eight artists, with whom it has previously worked: Jean-Michel Alberola, Raymond Depardon Et Claudine Nougaret, Takeshi Kitano, David Lynch, Beatriz Milhazes, Patti Smith And Hiroshi Sugimoto. Chosen for their exceptional ability to listen and observe, as well as for their sense of curiosity, these eminent figures from the worlds of art and cinema worked hand-in-hand with the mathematicians to transform and combine the aesthetic, scientific and educational aspects of mathematics into a tangible experience.

The exhibition invites visitors to journey deep into the heart of mathematical thought, from pure mathematics to applied mathematics, from the discipline itself to the women and men who make it. Inspired by the thoughts and ideas of all of the mathematicians involved in the exhibition, David Lynch has invented a structure in the shape of a zero to accommodate Misha Gromov’s Library of Mysteries. From Archimedes to Poincaré, Descartes to Einstein, this library provides a retrospective of the major events in the history of mathematics and human thought via an audiovisual installation designed by the American filmmaker with the help of Patti Smith:

“The symbols you recognize are words and the mirrors are books. You start reading and your conversation with the Universe begins.” In addition, as a counterpart to this historical, scientific and philosophical perspective, David Lynch has teamed up with Takeshi Kitano and Beatriz Milhazes to create an arrangement of visuals and installations that show the diversity of mathematics and, in particular, its contribution to the most advanced areas of scientific research. Two exceptional contributions will make it possible to observe the real-time evolution of two major projects of contemporary science: experiments with matter being conducted by the CERN inside The Large Hadron Collider (Lhc), and the mapping of the early universe as recorded by The Planck Spacecraft Of The Esa whose data is being studied by European astronomers, notably at the IAP.

In addition, Pierre-Yves Oudeyer and his colleagues at INRIA and Bordeaux University will display the latest results from their work, which concerns a Society Of Robots Endowed With Artificial Curiosity. Their active presence in the exhibition is in itself an experiment that will allow these scientists to advance even further in their revolutionary research program.Visitors will then be able to get to know the women and men who breathe life into mathematics. In a film made by Raymond Depardon and Claudine Nougaret, they are each given four minutes to express themselves freely about the passion that illuminates them. Jean-Michel Alberola charts the ideas of one of the last universal scholars, Henri Poincaré (1854-1912), by creating a work in the form of a mathematical firmament. Hiroshi Sugimoto concludes the visit with a hyperbolic form entitled a Surface of revolution with constant negative curvature which reflects the elegance of the abstract thinking expressed by the mathematicians in the film of Raymond Depardon and Claudine Nougaret.

Like a culminating point rising toward infinity, Sugimoto’s work asks the inevitable question at the heart of this project: how can mathematical abstraction be represented? By taking mathematics out of the milieu in which it is usually articulated, by creating an exceptional environment for interaction between artists and mathematicians, as well as between the artists themselves, the Fondation Cartier and the IHÉS are offering the public a chance to experience fragments of mathematical beauty through a geometrical, algebraic, artistic and cinematographic mosaic that is the result of the generosity and open-mindedness of all the participants involved.

Misha Gromov, from the essay Between Two Mirrors published in the exhibition catalog.